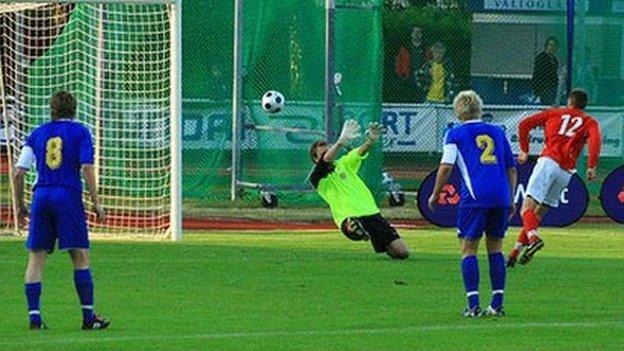 Jersey's men's football team will not compete at the 2013 Island Games in Bermuda, the side's manager Craig Culkin has confirmed.

Jersey are one of the most successful sides at the biennial tournament but there have been concerns over travel and accomodation costs.

Instead Culkin hopes they can attract semi-professional teams to Springfield for monthly matches.

"It's certainly been a difficult decision," he told BBC Radio Jersey.

"We've come up with an alternative plan which is a game every month from September."

Jersey won gold at the football tournament at the 2009 Island Games in Aland, becoming the first team to win the tournament three times.

They won bronze in 2011 when Jersey took more than 230 sportsmen and women to the Isle of Wight.

But speaking to the BBC in November, Jersey's Island Games Association chairman Steve Jacobs said he expected that to be nearer 160 in Bermuda.

Other sports launched fundraising drives, with some athletes having to raise up to £3,000 for transport and hotels.

Culkin said: "I think money is best being spent on 10 to 12 fixtures over the course of a season rather than two games in Bermuda.

"I'd like to see us playing against maybe semi-professional sides or reserve sides within the Conference and lower leagues.

"I think it's pointless asking Premier League clubs to come across although once every now and again to raise the profile commercially for the Association wouldn't do us any harm."

Jersey are making final preparations ahead of the first International Shield tournament in Gibraltar. They face Channel Island rivals Guernsey in the semi-final on Thursday 28 June.