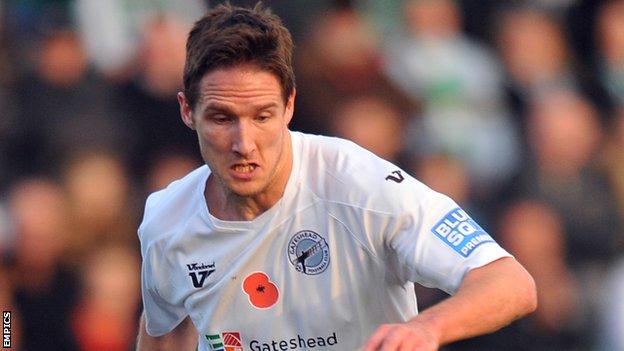 Luton Town have completed the signing of Gateshead top scorer Jon Shaw on a free transfer.

The 28-year-old, who has agreed a two-year deal, scored 28 goals in the Blue Square Bet Premier last season, taking his tally to 45 in two years.

He joins Wycombe forward Scott Rendell in signing for the Hatters.

Rendell, 25, is understood to have moved to Kenilworth Road on a free transfer and has also committed to a two-year contract.

"Him and Scott Rendell are big signings for us. Both had a lot of choices and a lot of clubs chasing them," boss Paul Buckle told the club website.

"They've come here because this is Luton Town and I think they're perfect for us."

He leaves Wycombe after two years at Adams Park, although he spent the majority of last season on loan spells at Bristol Rovers and Oxford United, and makes Luton the 11th club of his eight-year career.

He will be re-united with Buckle, having played under him during loan spells at Torquay and Bristol Rovers.

Shaw has been a long-term target for the Hatters, who had bids rejected for the frontman in January.

He started his career at Sheffield Wednesday, scoring his first senior goal in a 3-2 loss at his new employers, and has gone on to score 107 goals in 297 league games for nine different clubs.