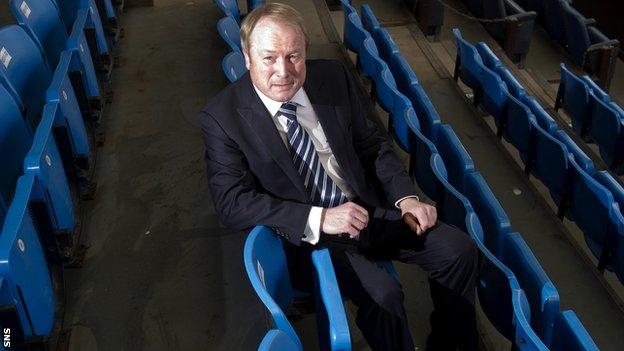 Chairman Michael Johnston is encouraged by a five per cent rise in season ticket sales at Kilmarnock compared to the same period last year.

But he warns that the club will need an extra 1,000 fans at home games should a 'newco' Rangers not be admitted to the Scottish Premier League.

And he admits that forward planning has been hindered by the uncertainty.

"The next few weeks are critical in terms of preparing the playing squad for the new season," said Johnston.

The 12 SPL sides will meet on 4 July to decide whether a new Rangers should be granted entry to the top flight.

It's a sobering thought that we'd need around 1,000 additional adult season ticket sales to make up for the loss of two home fixtures against Rangers

And Johnston is concerned by the potential loss of revenue should that vote go against the Ibrox club.

Pre-season training for Killie begins on 25 June and some out-of-contract squad members have yet to be offered new deals.

Manager Kenny Shiels would also like to recruit some of the signing targets he has identified.

"The uncertainty over Rangers' participation in the SPL and the potential consequences of that for the level of gate receipts and TV revenues received via the SPL has meant that we have not been able to press ahead with our plans," explained Johnston.

"For that reason, the news on season ticket sales offers encouragement and, hopefully, we'll be able to continue to report positive news as we proceed through the renewal process.

"It's a sobering thought, however, that we'd need around 1,000 additional adult season ticket sales to make up for the loss of two home fixtures against Rangers next season - but if that becomes a necessity, then that's what we'll aim to do.

"So, we're looking for the wider issues to be resolved quickly, which will allow us and the rest of the SPL clubs to finalise budgets and pre-season plans and get back to playing football.

"Now, perhaps more than ever before, we need our true supporters to back the club - regardless of who "Club 12" turns out to be."

The soon-to-be liquidated Rangers were replaced by a Club 12 on the SPL's fixtures list, with Kilmarnock hosting them on day one of the new term.