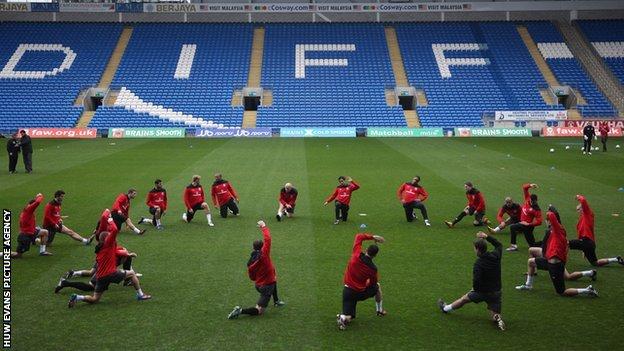 Wales have confirmed that the Cardiff City Stadium will host their first two World Cup qualifiers against Belgium on 7 September and Scotland on 12 October.

Manager Chris Coleman has also arranged a friendly against Austria at the Liberty Stadium on 6 February.

Wales will return to the same Swansea venue on 26 March when they host Croatia in another World Cup qualifier.

The international season will begin with the 15 August friendly against Bosnia-Hercegovina at Parc y Scarlets.

The match in Llanelli will be the third full football international to be staged at the home of the Scarlets regional rugby side and Llanelli RFC.

The national side have faced Bosnia on one previous occasion when they drew 2-2 at the Millennium Stadium in 2003.

The game, which kicks off at 19:45 BST, will be Wales' final preparations for the World Cup qualifiers.

After Coleman's side face Belgium, they travel to take on Serbia four days later, then face another double-header in October against Scotland and then away to Croatia.