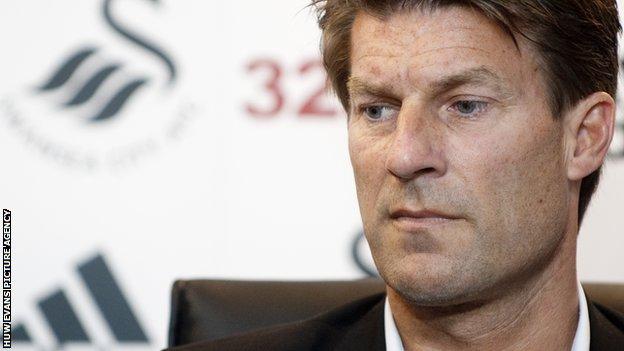 Michael Laudrup has reassured Swansea City that he will 'not change the club for change's sake' during his reign.

The new Swansea manager hopes to strengthen a squad that finished 11th in their debut Premier League season.

Laudrup succeeds Brendan Rodgers on a two-year contract and has been linked with Sweden striker Markus Rosenberg and Arsenal's Dane Nicklas Bendtner.

"It is a little early to talk about targets for next season," said ex-Real Madrid and Barcelona playmaker Laudrup.

"There's obviously a lot of names on the table right now but we will just have to discuss them.

"I haven't talked yet to managers about other players but I think you have to use your network.

"I would like a new beginning. But change for change's sake, I don't think that is good. To sign seven or eight players does not make sense.

"I think it's very important to get players here who want to show what they are capable of and that hunger to show at this level."

"That's important - not to sign a name just because it looks very good.

"This is Swansea's second season in the Premier League. The first one was fantastic for them."

Prudent Jenkins had already made it clear Laudrup would not be handed a massive transfer budget ahead of their second season in the Premier League as Swansea usually add a just a few players each transfer window.

Denmark's Euro 2012 stars Michael Krohn-Dehli and striker Bendtner have been linked with Swansea and possibly joining fellow countryman Laudrup at the Liberty Stadium.

Dutch international and PSV Eindhoven attacking midfielder Otman Bakkal has also been linked with Swansea and Bakkal and Krohn-Dehli, who has 12 months left on his contract at Brondby, would both be ideal replacements for playmaker Gylfi Sigurdsson.

The Iceland international spent the second half of last season on loan at Swansea from Hoffenheim but his future has yet to be resolved.

Swansea agreed a fee of £6.8m fee with the German club in May but Sigurdsson could be set to join former boss Rodgers at Liverpool.

"It's a special case," said Laudrup.

"He was on loan here and did very well.

"He has a possibility to go to another club. He is owned by a German club. I would like him to stay, he did very well here."