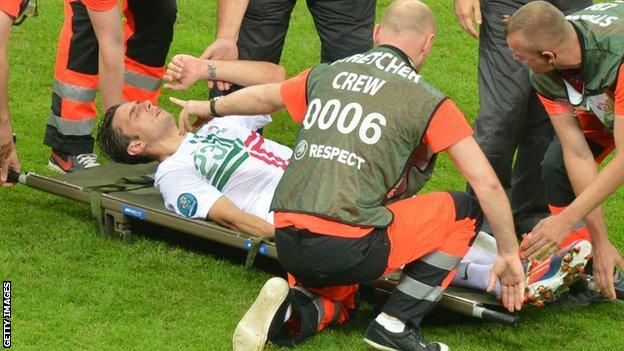 Striker Helder Postiga is set to miss Portugal's Euro 2012 semi-final after picking up an injury in the last-eight win over the Czech Republic.

Postiga was brought off late in the first half of Portugal's 1-0 win with what appeared to be a hamstring injury.

Team doctor Henrique Jones said the injury will be evaluated on Friday but it "looked inevitable" that Postiga will miss Wednesday's semi-final.

Portugal face either France or Spain in Donetsk in the last four.

Helder Postiga is one of three Portuguese players to have scored in three different European Championships, along with Nuno Gomes and Cristiano Ronaldo

Postiga was carried off in the 39th minute of Thursday's game in Warsaw and replaced by Hugo Almeida.

After coming off Postiga said he hoped the injury was not "too serious" but said he would have to see what a scan revealed.

Jones added: "We are going to do all we can to ensure we get him [Postiga] back for the final."

Despite dominating the game, it took Portugal until the 79th minute to score the game's only goal, with Cristiano Ronaldo heading home a Joao Moutinho cross to book their place in the last four.