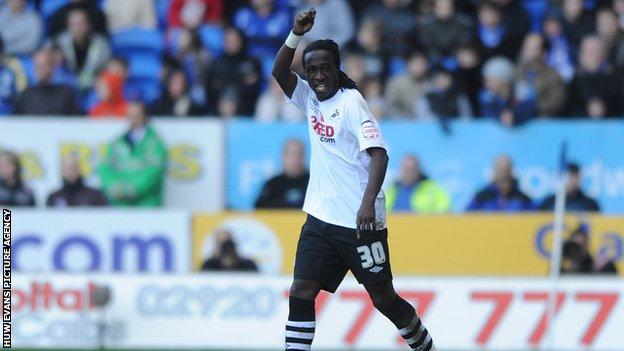 Swansea chairman Huw Jenkins has denied claims that the club have made a recent £3m bid for Marvin Emnes.

The Middlesbrough striker spent a short but successful one-month loan spell at the Swans in October 2010 and became a cult hero when he scored the winner against Cardiff City.

Jenkins said an enquiry had been made to Boro: "But that was six weeks ago when Brendan Rodgers was the manager.

"We have certainly not made an enquiry since [Michael Laudrup took over]."

"We made an enquiry with Middlesbrough six weeks ago regarding Marvin's availability,'' added Jenkins. "We needed to test the water.

"Having just appointed a new manager, all current and new options are being assessed. Michael, with the help of the recruitment staff, will decide over the next few weeks the direction we take regarding potential new signings.

"It's important our supporters are aware of this and not to read too much into the host of names being linked with the club at present or in the future.''

Swansea City have been linked with several players since Laudrup's appointment on a two-year deal, including Sweden striker Markus Rosenberg.

Chairman Jenkins had already made it clear Laudrup would not be handed a massive transfer budget ahead of their second season in the Premier League.

The future of midfielder Gylfi Sigurdsson, who spent the second half of last season on loan at Swansea from Hoffenheim, has yet to be resolved.