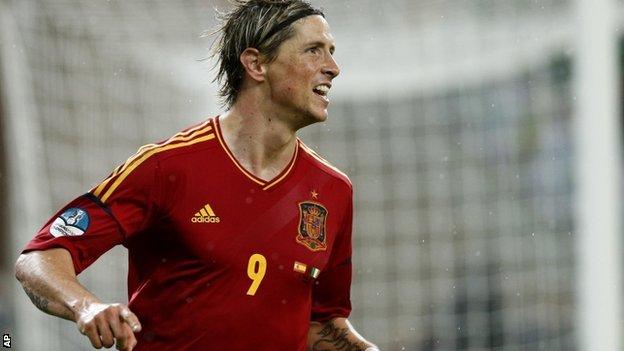 And, if they are going to successfully defend their title, then they need to get into gear quickly - starting with Saturday's quarter-final against France.

I'm expecting to see a high-quality match here in Donetsk and a hard-fought one too, because France are very capable of giving them a difficult game despite the reports of unrest in their camp.

A lot was expected of Laurent Blanc's team in Poland and Ukraine and they did play well in their first two group games, drawing with England and then beating Ukraine.

"Although Fernando Torres scored twice against the Republic of Ireland, I am not sure he fits into their team. They look more comfortable playing with a 'false nine'."

They were too complacent against Sweden, and that defeat in their final group game showed how dangerous it is to switch off when you are playing tournament football. It seems to have caused a few arguments in their team too.

But I don't think they will make that mistake again now they are in the knockout stage. This is cup football now and teams will do whatever they can to get through.

France will not go chasing the game. They will sit back, invite Spain on to them and then look to hit back on the counter-attack.

We know Spain's strengths, and how they come at teams, and that is down the middle. France have a strong enough spine to cope with that.

The key for France will be Yann M'Vila and Alou Diarra, the two midfielders who will be protecting their backline

Laurent Koscielny will come in to replace the suspended Philippe Mexes at centre-back, playing alongside Adil Rami.

The key for France, though, will be the two midfielders in front of them.

Yann M'Vila and Alou Diarra will have to protect their backline, and that job involves a lot of graft when you are up against a team who can pass it about like Spain do.

Then, when they get the ball back, it is up to Franck Ribery and Samir Nasri to try to hurt Spain. Getting the first goal could be crucial for them.

I would not usually give them too much hope but, let's be honest, Spain have only shown glimpses of their best form so far. We know what they are capable of but they have not shown us very often during their their time in Poland and Ukraine.

Apart from against the Republic of Ireland, who are well below the level of opposition that France will offer, they could easily have lost to Italy and were very fortunate to beat Croatia.

Bearing in mind France are so strong in midfield, I think Spain will probably start with the 'false nine' system they have been using, and play with four men in the middle.

Yes, they could start with Fernando Torres up front but France's centre-backs are quite physical and I don't see Torres getting anywhere near as much joy out of them as he did against the Irish who, let's face it, were naive at the back.

In truth, though, Spain have so many options.

Their midfielders have enough quality to keep the ball and dictate their own tempo on the game.

If things click with Andres Iniesta, Xavi, Sergio Busquets, Xabi Alonso and David Silva then they can cut teams up and France will have their work cut out just stopping them passing round them.

But the encouraging thing for France is that I see Spain as being a little bit weak at the back.

I certainly don't see their full-backs Alvaro Arbeloa and Jordi Alba as being top class defensively, and they don't always look dangerous when they get forward too.

I am still backing Spain to just edge this game but I am not fully convinced they will get past Portugal in the semi-final too.

At the start of the tournament, most people were saying that either Spain or Germany would win it and, as things stand, that is the final we are heading towards.

I still think Germany will get there, but Spain? We shall see. They have done enough to get through to the last eight but they are going to have to do an awful lot more if they are going to make it to Kiev on 1 July.