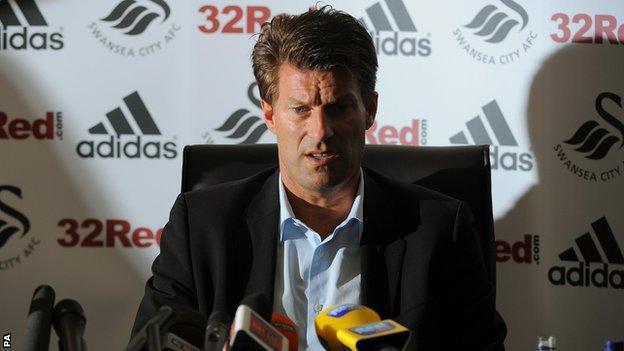 Rodgers led Swansea to the Premier League via the Championship play-offs and the Welsh club impressed as they finished 11th in their debut season.

"It's going to be really difficult to match that," said Match of the Day presenter and ex-striker Lineker.

"Other teams tend to work you out... so you've got to take it on from there."

Laudrup has previous managerial experience at Brondby, Getafe, Spartak Moscow and Real Mallorca, but developed his football philosophy during his time playing in Spain.

Lineker warns that even teams who have survived their first baptism of fire in the Premier League can suffer from 'second-season syndrome' and find the next season can become more of struggle to stay up.

"It'll be a tough one for him [Laudrup] but they've got a lot of good footballers and a style of play that seems comfortable to them," added Lineker, speaking to BBC Sport Wales' The Back Page programme.

"So I don't think he'll have to change too much, which is a good thing, maybe just add one or two players that he thinks will strengthen their squad.

"It's an interesting appointment and makes a lot of sense in many ways, because Brendan Rodgers played a certain style of football that I suppose equates to the way they play in Spain a lot of the time.

"He'd done a magnificent job there, to take them up for a start and then not only to manage to stay up but to stay up comfortably playing the sort of football we see Barcelona playing in terms of the percentage of possession they had in games.

"Swansea got bags of attention last year because they played so wonderfully well... a lot of our guys eulogised at not only how well Swansea had done after being promoted but also the style of football they played last season was so good to watch.

"Michael Laudrup has had a lot of experience playing and coaching in Spain so it looks like a sensible fit.

"Obviously he's a very respected both as a footballer, he was a brilliant player, and he's made quite a lot of progress in his coaching career, so hopefully it'll work out well for both parties."