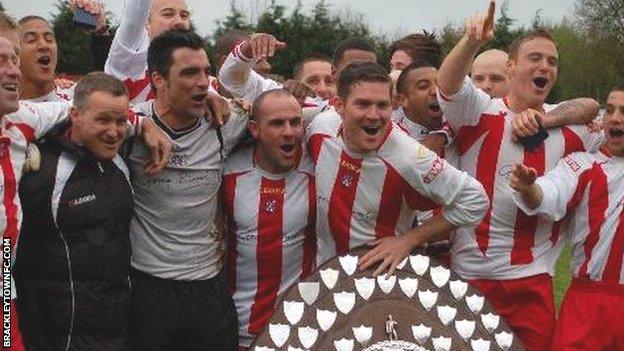 The striker has agreed a new deal for next season but there are no new signings for the club as yet.

Diggin told BBC Northampton: "Our squad is definitely good enough to compete in this league and do well.

Kemp will need replacing but there may only be three or four new players arriving to supplement what worked so well in 2011-12.

A left-back, a holding midfielder and a striker are likely to be on Brady's shopping list.

"All the lads know each other and how we play, and hopefully there won't be too many coming in to unsettle things."

He continued: "The manager will probably get a few in, but to keep the majority of the squad together would be good.

"The ground is getting upgraded and Brackley is a club looking to go forward. Let's hope I can be a part of it."

"As soon as I knew [manager Jon Brady] wanted me to stay, I knew that I'd sign," he added. "I wasn't thinking about anywhere else. I enjoyed my first season.

"I've scored goals in this league before, so hopefully I can do the same again."

Although Brackley will not face local rivals Kettering Town in the Southern Premier, Diggin will have the chance to play against his former employers.

"I was at Corby for a long time but I didn't get to play in the new stadium. I'll look forward to going there, playing them and hopefully beating them," he said.