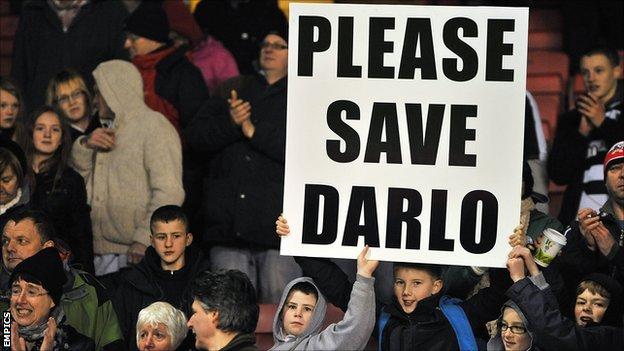 DFC 1883 Limited chairman Dennis Pinnegar has said supporters will be given the chance to vote on the new name for Darlington Football Club.

The Football Association has told the Quakers they must change their name under the terms of the DFC 1883 Ltd group's takeover of the football club.

"We'll put a poll on the Uncovered messageboard for fans to come up with a name," Pinnegar told BBC Tees.

"They can vote for the names and we'll be called what the fans want us to be."

Despite the name change, the club will be able to retain the crest from the former Darlington Football Club.

Meanwhile, Pinnegar remained confident of on-the-field success during the forthcoming season despite the FA's decision to uphold the demotion to the Northern League.

Relegation by four divisions means Darlington will be up against teams such as Whitley Bay, Dunston and Spennymoor, under the management of former player and assistant Martin Gray.

"I feel bitterly disappointed [by the decision]," added Pinnegar.

"But all this has done is delay our journey up the Football League system by a year.

"I've spoken to the manager, the directors, the supporters, this is the beginning of a journey."