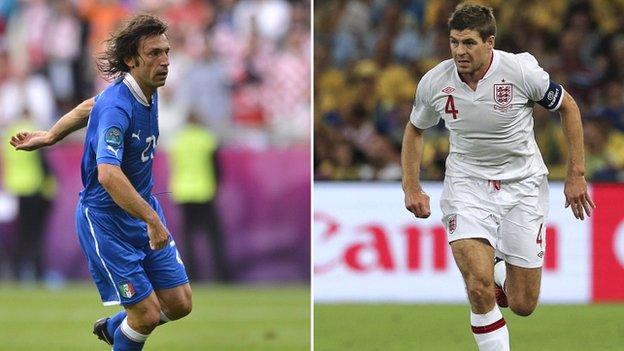 The current England and Italy teams share so many of the same characteristics that it is no wonder experts are expecting a tight encounter in their Euro 2012 quarter-final on Sunday.

Solid defence, a talismanic midfielder and a potentially match-winning striker are just three aspects which both sides will aim to rely on as they target a semi-final against Germany next Thursday. 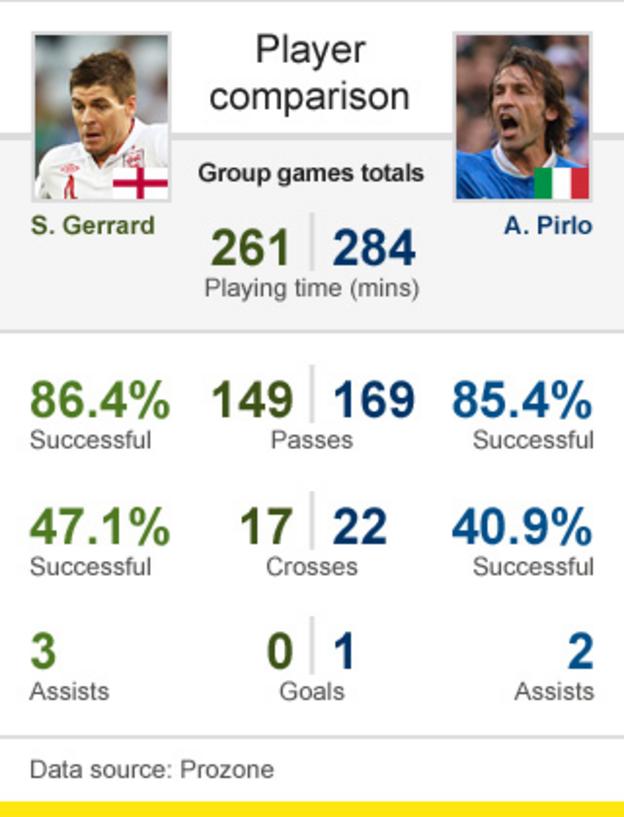 Indeed, it could be argued that the England team has a largely Milanese flavour to it given that former Inter boss Roy Hodgson is now in charge after he replaced former AC Milan manager Fabio Capello in the build-up to the European Championship.

And with Italian managers queuing up to recognise England's Italian attributes - Manchester City boss Roberto Mancini called Hodgson "an English Italian" - there are fears the two teams could cancel each other out.

Yet for all of England's functionality in defence, they have been one of the most effective teams in attack, with only Portugal quicker to turn limited possession into goals. Much of that has been down to skipper Steven Gerrard, who has set up three of England's five goals.

Former England striker Alan Shearer said: "His range of passing and crossing has been sensational. The ball he put in for Andy Carroll's header against Sweden was just an incredible cross and there's probably only him in the England team that can do that."

For Cesare Prandelli's Azzurri, the counter threat is deep-lying midfielder Andrea Pirlo, who has had a hand in three goals too.

His ability to dictate the tempo of Italy's play will have a large bearing on whether they are patient or choose to counter attack as they did in scoring in the 1-1 draw with Spain in their opening game. 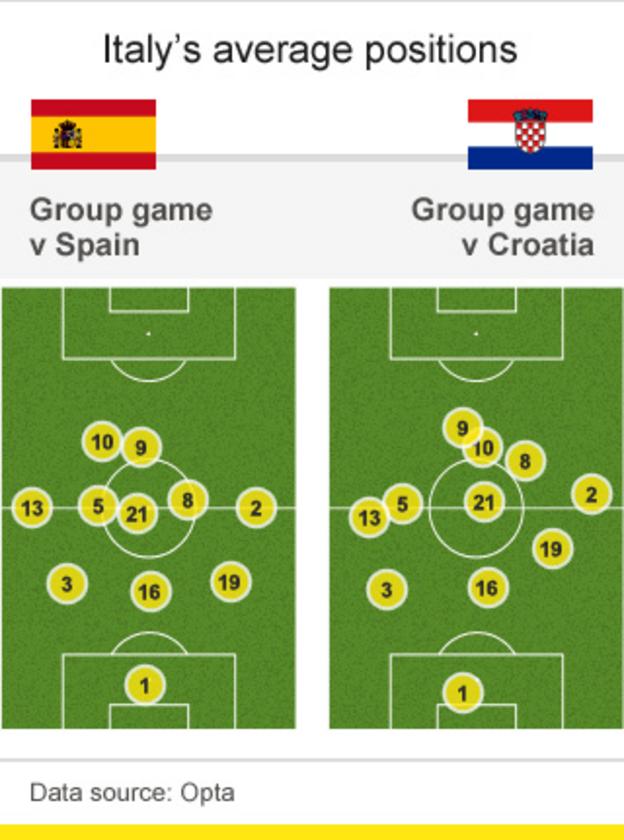 The Italian team has already shown they are more comfortable in possession than England despite three of their four goals coming from set-pieces.

And the 33-year-old Juventus player is helped by Prandelli's unorthodox 3-5-2 system, with wing-backs Christian Maggio (2) and Emanuele Giaccherini (13) able to spring from defence in support, as fellow midfielders Thiago Motta (5) and Claudio Marchisio (8) offer close company.

Then there is Italian forward Mario Balotelli, who may feel he has a point to prove against some of his Manchester City team-mates.

Gerrard admits he will have a tough test against Pirlo, who he describes as a "world-class player".

But he added: "This game is not about me or Pirlo or Wayne Rooney and Balotelli. It's about England v Italy and I think the game is very even. It's a 50-50 match."

One weakness England may look to exploit is in Italy's defence where they will be without the injured centre-back Giorgio Chiellini.

He is often first to move out of the backline to press opposition forwards and is calm in bringing the ball out from the back.

The Juventus defender was culpable in letting the ball drift over him for Mario Mandzukic's equaliser against Croatia, so there are areas that England can capitalise on.

Prandelli's formation also means there could be room behind their wing-backs for the likes of Danny Welbeck to target, and, with 87 minutes under his belt following his two-game suspension, Rooney will hope to improve his ball retention.

There is danger lurking in Italy's attack, though. Joleon Lescott will be more than aware of his City team-mate Balotelli, yet it is only in the Sweden game when England faced Zlatan Ibrahimovic that they came unstuck.

Trying to stretch England's defence will be tricky, based on the discipline drilled into them by Hodgson, but the cleverness in Prandelli's set-up means that he can play two strikers without sacrificing midfield control and Antonio Cassano could be vital in pulling England out of position.

With little to choose between the two teams, the prospect of extra-time and penalties looms large.

Four-time world champions Italy looked like they had banished a similarly wretched spot-kicks record to England when they beat France in the 2006 World Cup final.

But at Euro 2008 they lost on penalties to eventual champions Spain at the quarter-final stage. With several of that team still playing, they will be keen to make amends if it reaches that conclusion.