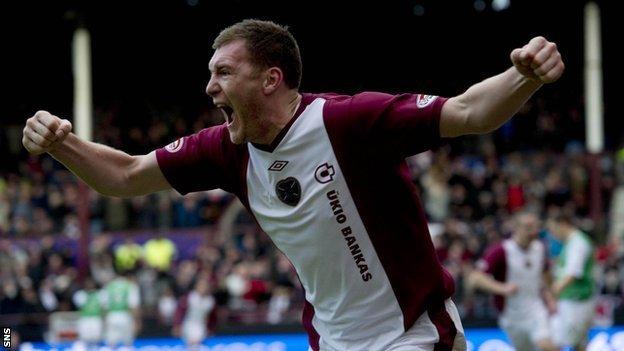 Former Hearts striker Kevin Kyle has told BBC Scotland he has been courted by Hibernian and Dunfermline.

Free agent Kyle left Tynecastle in March as he continued his recovery from hip surgery.

The 30-year-old aims to be training with a new club by the start of July and also says he would consider joining the relaunched Rangers.

If I'm fit and healthy, I believe I can do a job for anybody in the SPL

"I'll not be able to get a deal until I fulfil a pre-season but I'm very, very confident of doing that," he said.

"I feel fine. I don't have any aches or niggles."

Kyle revealed he has been contacted by Hibs assistant manager Billy Brown and Pars boss Jim Jefferies, both of whom worked with the player at Hearts and Kilmarnock.

"Billy says Hibs would like me just to go on pre-season and see how that would go and Jim was the same with going down to Dunfermline," Kyle said.

"I haven't heard anything from Hearts, which is pretty disappointing but, at the same time, they don't have a manager so they don't know what's happening.

"My situation with Hearts was that if [former manager] Paulo Sergio was staying, he wanted me to come back and do pre-season. I haven't had an opportunity to speak to [Hearts coach] Gary Locke yet.

"I've read things like, 'surely he can't got to Hibs because he's played for Hearts'.

"If I'm fit and healthy, I believe I can do a job for anybody in the SPL."

Rangers' league status is in doubt due to the liquidation-bound company which ran the club recently selling its assets to Charles Green's consortium.

Green wants the relaunched Rangers to replace the old one in the Scottish Premier League but if he does not get the support of seven other top flight clubs, the Ibrox side could end up in Scottish Division Three.

Kyle told Rangers assistant manager Kenny McDowall during a chance meeting he would be "cheap and cheerful" if they wish to sign him.

"I'd go there in a heartbeat if they're going to pay wages," added Kyle.

"I just want to get back playing regardless of where it is and if Rangers end up going to the Third Division and want somebody with a bit of experience, I'd happily go there."