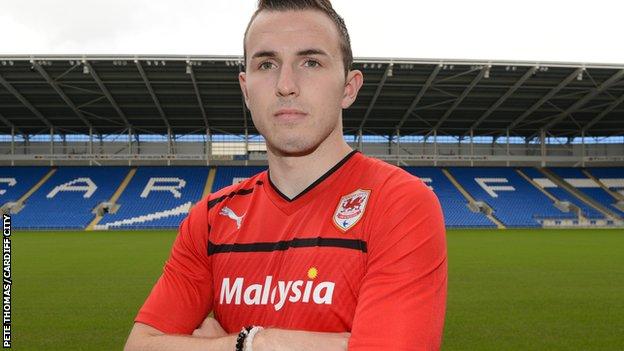 Jordon Mutch admits Cardiff City's ambitions to play in the Premier League were a key factor behind his move to the Welsh capital.

The Bluebirds signed the England Under-21 midfielder from Birmingham City on a three-year contract.

"I was really interested to come and play for Cardiff and the ambitions of the club really excites me," said Mutch.

The 20-year-old made 34 appearances for Birmingham City.

"The move to Cardiff is huge for me," said Mutch.

"They are an ambitious club and I am really looking forward to playing for them.

"I want to be in the Premier League and I can see the club going there with what they are putting in place."

I am just really happy to be at a big club, with a big fanbase and a great stadium

Cardiff concluded the transfer with Birmingham City for an undisclosed fee after Mutch agreed personal terms and passed a medical.

Mutch, who had been at Birmingham since he was 15, admitted the prospect of playing for Mackay again had been another factor in his move to south Wales.

"I had a good time at Watford," said Mutch.

"Malky brought me on loads there and I am just really happy to be at a big club, with a big fanbase and a great stadium.

"Hopefully, we will sign a few more players to make the squad bigger and really challenge for automatic promotion.

"I know how Malky likes to play and I am really looking forward to it."