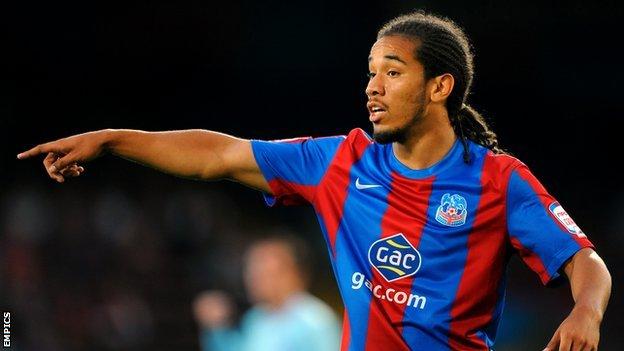 The 21-year-old has agreed a three-year deal with the Championship newcomers.

Scannell, who has represented the Republic of Ireland at youth level, made 41 appearances for the Eagles last season, scoring four goals.

"I've seen them for the last couple of seasons and they've done well. I think I can fit in well here," he told BBC Radio Leeds.

"It was really difficult to leave Palace but I think sometimes in life you have to make that move and I needed a new challenge.

Scannell scored his first goal for Palace against Sheffield Wednesday at the age of 17.

"Hopefully being here can help me to grow and become a better player."

Terriers boss Simon Grayson told the club website: "He is a brilliant addition. Despite his young age, he brings bags of experience.

"We have been working hard on a number of targets and hopefully we will be able to get a few more tied up over the next couple of days.

"He is an exciting, young, talented footballer who is very adaptable. He can play on either wing or just off the striker - he offers great options.

"Hopefully he will be able to fulfil his potential with us. It wasn't that long ago that a lot of top-class clubs were taking a look at him so we are delighted to now have him among our ranks."