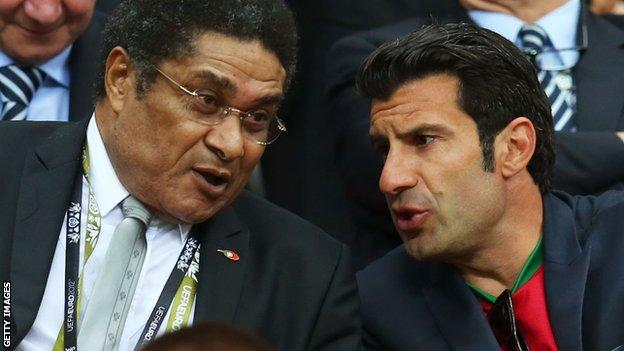 Former Portugal striker Eusebio has moved to a Lisbon hospital after having tests in Poland for a heart problem.

The 70-year-old, who has been with his compatriots at Euro 2012 as a team ambassador, has a history of heart trouble and was taken to hospital in Poznan after falling ill last Saturday.

Doctors at Lisbon's Luz hospital said he was in a stable condition.

Dr Roquette added: "Eusebio wanted to go home, said he felt well, had a good trip and that is a good sign."

Better than a goal a game

Doctors in Poznan conducted tests on Sunday, but ruled out a heart attack.

Instead, they blamed Eusebio's condition on the excitement related to Portugal's matches during the tournament.

Eusebio, who was at Portugal's quarter-final win over Czech Republic last Thursday, had a heart operation five years ago.

He was treated for bronchial pneumonia in December and has been admitted to hospital on several occasions since.

He has been suffering from hypertension and his doctors have said he must have regular examinations.

The former striker played for nine clubs during a 22-year professional career but is most remembered for his 15 years with Benfica and a goal-laden international career.

Born in Mozambique in 1942 when it was still a Portuguese colony, Eusebio da Silva Ferreira went on to play 64 times for Portugal, scoring 41 goals and winning the Golden Boot as the 1966 World Cup's top goalscorer.

He won 10 league championships, five Portuguese cups and one European Cup in his 15 years at Benfica and was Portugal's top league scorer between 1964 and 1973.