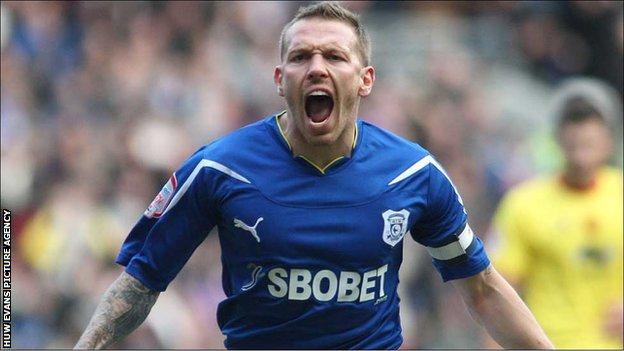 Craig Bellamy could be set for a return to home-town club Cardiff City as the Bluebirds consider a bid for the Liverpool and Wales striker.

The Championship club are understood to be working out the finances to re-sign the 32-year-old who captained Cardiff during a season long loan spell.

Bellamy signed for Liverpool on a two-year deal from Manchester City in 2011.

Cardiff hope to discuss a proposed deal with Liverpool before any talks take place with Bellamy.

Bellamy, whose family home is on the outskirts of Cardiff, scored 11 goals in 35 games for Cardiff during his loan spell at the Cardiff City Stadium in the 2010/2011 season.

The Cardiff-born forward, who has scored 19 goals in 69 Welsh internationals is a former Norwich City team-mate of Cardiff boss Malky Mackay.

Iwan Roberts, the former Wales striker, who played with Bellamy and Mackay at Norwich City, believes there is a mutual respect between the pair.

"Malky knows better than anybody else what Craig brings to the table," said Roberts.

"He knows what Craig brings and knows his strengths and that he can put demands on other players and get the best out of them.

"He is a leader and is a player who wants to win things. If Malky can lure him away from Liverpool back to Cardiff, I think it would be a tremendous signing."

A condition of the financial injection from owner Tan Sri Vincent Tan and chairman Dato Chan Tien Ghee, which includes funds for player recruitment, is the controversial move of changing Cardiff's shirt colour from blue to red in the hope it could expand the club's appeal in "international markets."

Sections of the Cardiff support are upset at the shirt colour change but a signing of Bellamy's profile and stature would help quell any fan discontent.

"They have promised good investment into the club, there have been huge amounts of money mentioned and if they can lure Craig away from Liverpool it would be a tremendous signing for Cardiff City," said Roberts.

"It would be a sign of things to come."

Roberts believes Bellamy, who signed a two-year deal with Liverpool when he left Cardiff in 2011, will feel he has some unfinished business with his hometown club.

"Craig has always said he wants to end his career at Cardiff," said Roberts.

"He is a Cardiff City supporter and he probably feels he has unfinished business at the club after the season's loan he had. I think he would love to come back and finish that chapter off by helping Cardiff win promotion."

In fact, Mackay made a last-ditch bid to sign Bellamy permanently for Cardiff in August 2011 before the player joined Liverpool.

Mackay is also is close friends with new Liverpool manager Brendan Rodgers and Bellamy is a fan of Rodgers' style of football - but has often spoken of his desire to inspire boyhood club Cardiff into the Premier League.