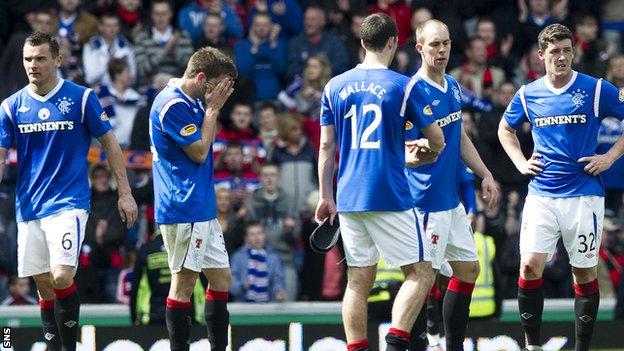 A newco Rangers will be refused admittance to the Scottish Premier League, with six clubs publicly saying they will vote against the application.

St Johnstone, Aberdeen and Inverness announced their opposition on Monday, following in the footsteps of Hearts, Dundee United and Hibernian.

Rangers require an 8-4 majority in the 4 July vote to transfer their share in the league to Charles Green's newco.

Green's club is now likely to apply to play in the Scottish Football League.

Rangers, champions of Scotland a record 54 times, lost their the SPL place when the old company was consigned to liquidation earlier this month.

Aberdeen chairman Stewart Milne said: "I can confirm it is our intention to oppose readmission to the SPL for any Rangers newco.

"If readmission were to be refused, we believe the appropriate course of action would be for Rangers newco to apply for membership to the SFA and to submit an application for admission to the SFL."

Inverness chairman Kenny Cameron said the club would be in an "untenable position" if they ignored the wishes of their supporters.

"We have listened to all our customers and taken the decision and we now look forward to their support going forward," he said.

"Financially, we examined the various scenarios and, frankly, none of them were positive for our club. It is extremely disappointing to be adversely affected by something not of our doing.

"We have also been contacted by supporters of various other SPL clubs, saying they would not be back to Inverness if we did not accept that sporting integrity was what mattered, but this is something that we had already considered and it is not only the integrity of the SPL that is at stake but the integrity of Scottish football.

"It is quite clear, that supporter opinion in Scotland overwhelming supports that view."

St Johnstone later added: "The board believes that sporting integrity should not be sacrificed in favour of economic expediency.

"It is important that a clear and unambiguous message goes out from the custodians of Scottish football that this sort of scenario should never be allowed to happen again."

Hibernian's Rod Petrie had been the first chairman to say that the integrity of the competition should come before financial considerations.

And on Sunday night the Edinburgh club released a statement saying: "Following a board meeting, Hibernian confirm the club will vote against the transfer of the Rangers share in the SPL.

"This reaffirms the view of the board that the sporting integrity of the SPL is of paramount importance.

"The board is also acutely aware that in making this decision, Hibernian - like other clubs in the SPL - will suffer collateral financial damage at a time of severe economic hardship and uncertainty."

Hearts were first to announce their decision before Dundee United chairman Steven Thompson followed suit after a meeting with fans' groups.

The vacancy in Scotland's top flight could instead be taken by either relegated Dunfermline or First Division runners-up Dundee.

Rangers were forced into administration in February over an unpaid tax bill and failure to secure a CVA [company voluntary arrangement] in order to exit the process allowed Green to purchase the club's assets in a £5.5m deal.