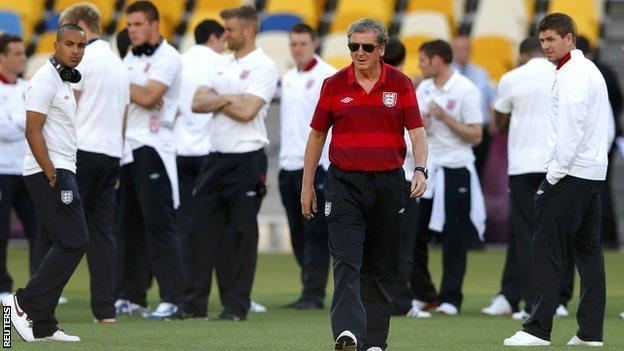 England have departed Euro 2012 at the quarter-final stage, beaten 4-2 by Italy on penalties.

The Three Lions topped Group D with two wins and a draw against opponents France, Sweden and Ukraine. Under new coach Roy Hodgson the side adopted a 4-4-2 system with which they persevered throughout the tournament, with star striker Wayne Rooney only available to participate in two of their four games because of a suspension.

England at Euro 2012 after the dust settled

Phil McNultyChief football writer, BBC Sport
England's story had a familiar ending as another penalty shoot-out sent them home heartbroken from a major tournament - but this time there must be no hard luck stories

What was said: "We are all hurt and disappointed but everyone's given it their best shot. It's a better team than two years ago. I think we've performed to a better level than at previous tournaments." - England captain Steven Gerrard

England take the lead after half an hour through a Joleon Lescott header from a Steven Gerrard free-kick, but are pegged back nine minutes later by a strike from the edge of the area from Manchester City midfielder Samir Nasri.

What was said: "I don't know if you can win tournaments playing like that, but it's a good foundation for us." - England midfielder Scott Parker

England take the lead again but suffer a scare as an Olof Mellberg brace put the Swedes in the ascendancy. Three Lions winger Theo Walcott is introduced and turns the tie, scoring the equaliser and creating the winner for his country.

What was said: "It's always nice to come off the bench and show what you can do. I've been disappointed that I haven't played." - England winger Theo Walcott

The returning Wayne Rooney nods England into the last eight of Euro 2012, but a scrappy game and a Ukraine 'goal' that is not given mar the result. But Roy Hodgson's side top the group after France lose 2-0 to Sweden, meaning they avoid current European champions Spain in the quarter-finals.

What was said: "It's my job to provide the assists. We've got terrific frontmen. If they get the service, then they will knock it in." - England captain Steven Gerrard

England play a defensive rearguard action for most of the match, and after 120 minutes the fixture produces the first 0-0 of Euro 2012 so far. More heartbreak for Three Lions fans as missed attempts from Ashley Cole and Ashley Young send England crashing out of a competition on penalties once again.

What was said: "It's sad to lose on penalties because it's a lottery. When your dreams are shattered, you can't be too positive." - England coach Roy Hodgson