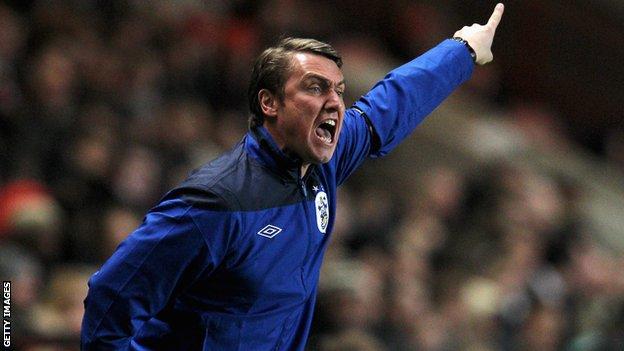 The 39-year-old has appointed Terry McDermott as his assistant manager and is also hoping to bring in Derek Fazackerley as first-team coach.

Acting chairman Peter Pannu told the club website: "I was impressed by Lee's tenacity, zest and ambition. He is determined to make Birmingham a force."

Clark will hold a news conference at St Andrew's on Wednesday.

The length of the contract has not been revealed, but it means a return to football for Clark four months on from his surprise sacking at Huddersfield.

The former Newcastle United, Sunderland and Fulham midfielder was seen as a bright young managerial talent for most of his three years in charge at the Galpharm Stadium.

After cutting his teeth in coaching under Glenn Roeder, first at Newcastle, then at Norwich, Clark brought in experienced duo McDermott and Fazackerley as his backroom team when he took over at Huddersfield.

He guided the Terriers to third place in League One in the 2010-11 season and, although they lost to Peterborough United in the play-off final, he was rewarded with a new rolling contract.

They began last season in the same form, Clark's Terriers eventually extending their unbeaten league run to a record 43 matches between January and November 2011.

With his team still fourth in League One, eyebrows were raised when he was sacked in February following a 1-0 home defeat by Sheffield United.

But the change in leadership ultimately paid off as the Terriers went on to win promotion to the Championship in May.

Under new boss Simon Grayson, they won after a dramatic 8-7 penalty shoot-out win over the Blades at Wembley.

But Grayson afterwards paid a generous tribute to his predecessor, saying: "Credit goes to Lee Clark, because he put most of that team together."