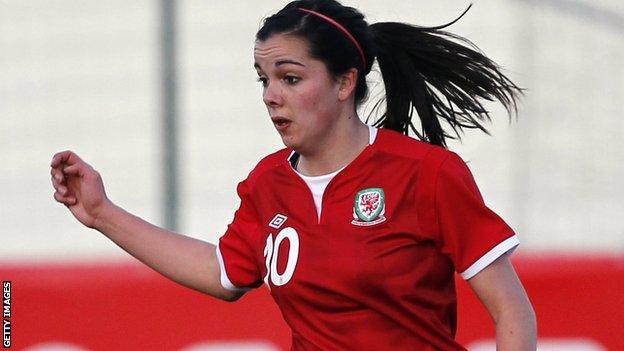 Striker Gwennan Harries is disappointed with the lack of Welsh representation in the Team GB women's squad for the London 2012 Olympics.

Coach Hope Powell has named a squad of 18 that includes 16 English players plus Scots Ifeoma Dieke and Kim Little.

Harries along with her Welsh team-mates will not feature for a squad that will play two games in Cardiff.

"With the first two games being held in Wales it's disappointing that there's not a few in there," Harries said.

"She [Powell] did say originally that she would pick on form so [there's] a couple of question marks over that.

"There's a couple of players in form especially [Bristol Academy midfielder] Jess Fishlock [who's] probably playing the best football in the [FA Women's Super] League at the minute.

"But then again you've just got to get on with it. She's made the decisions so we've got to get behind them and hopefully they'll win a medal.

"It is disappointing but there's nothing more we could have done."

Everton's Harries, who was won 53 caps for Wales, said she had been hopeful of being selected for Team GB.

But the 24-year-old admits competition for the squad, which does not have an age restriction like the men's competition, was fierce.

"I think you have to be confident within selection criteria like that, especially when she said she was picking on form," said Harries.

"But the standard of the squad is high and you can't argue with that. There's some very talented and experienced players within the squad.

"It would have been nice to have be in but she's obviously picked from what she feels is the best squad."

They also face Cameroon at Wales' national stadium on 28 July, with the venue also hosting a quarter-final on 3 August.

And despite the lack of Welsh representation, Harries hopes the south Wales public will support the women's team in Cardiff.

"I know there's a lot of tickets left unsold but hopefully people will get behind the team anyway," added Harries.

"It's a massive occasion to have the Olympics in this country and especially that this is the first event to take place at the Millennium Stadium.

"Hopefully people will get behind the team anyway. It's a massive deal for women's football and hopefully [it will] continue to help the development of the game."