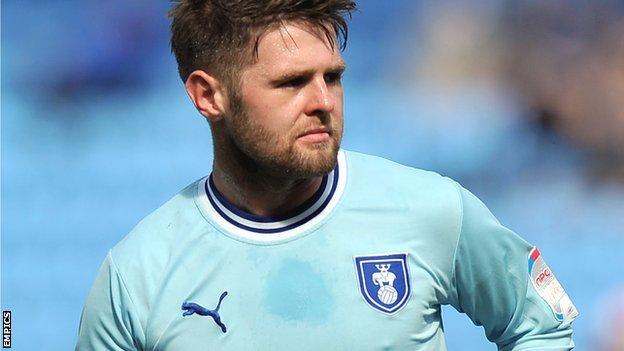 The 21-year-old spent time on loan with both Scunthorpe United and Coventry City last season.

"We're optimistic but we need to make sure we strike a financial balance," Hill told BBC Radio Sheffield.

"He represents good value for money. He can be creative, he can score goals and he can play in a two-man midfield."

Hill also revealed there remains a possibility that out-of-contract skipper Jacob Butterfield, also 21, could choose to stay at the club.

Butterfield has been linked with a number of clubs despite suffering a serious knee injury last season but Hill says no deal has yet been agreed.

"I've had some positive discussions with Jacob," he added.

"We have to be patient and wait for him to make his decision. If I were him I'd be worried that I didn't have my future sorted at this point.

"I believe he is still open to staying with us but I am led to believe there are a number of Premier League teams after him. If there are, I would have expected them to have made a move by now."

The Tykes boss confirmed he would like to bring in another goalkeeper and left winger to add to his current additions of striker Mido, midfielder Jacob Mellis and winger Kelvin Etuhu.