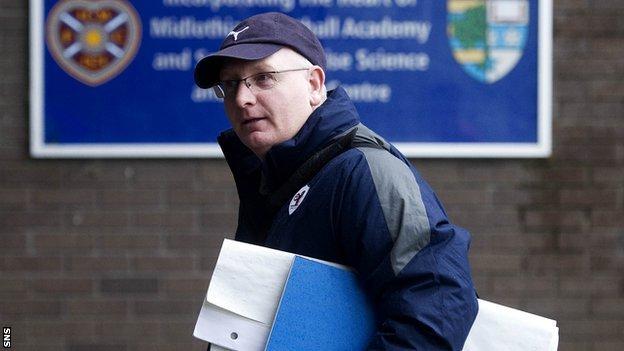 Hearts have finalised the return of John McGlynn to Tynecastle as manager on a one-year contract.

The former Hearts assistant joins after a spell at Raith Rovers, who had given the 50-year-old permission to talk to the Scottish Premier League club.

The club stated: "The post attracted interest from around the globe and the quality of the applications made it a difficult decision."

But McGlynn had impressed with his ability to develop young players.

He succeeds Paulo Sergio, who rejected the offer of a reduced contract after leading his side to victory in the Scottish Cup final against Edinburgh rivals Hibernian.

Hearts owner Vladimir Romanov last season began the process of reducing the wage bill at Tynecastle, saying it could no longer rely on him investing further in the club.

Romanov wants the club to concentrate on its youth system and, in announcing the arrival of McGlynn, the Hearts website highlighted the new manager's role in developing a number of future Scotland internationals during his previous spell at the club.

"John's track record in developing young players is outstanding and one of the key criteria for the appointment was an ability to successfully integrate youngsters into a senior squad which can compete competitively at the top end of the table," said a club spokesman.

"He also knows the club intimately, having previously spent 10 years as a coach here, and we are confident he can take the club forward and build on the success of last season's William Hill Scottish Cup triumph.

"We would also like to put on record our appreciation of Raith Rovers' co-operation in this matter."

He had two spells as caretaker manager in 2005 before assisting Valdas Ivanauskas as they won the Scottish Cup the following year.

McGlynn left Tynecastle in November 2006 to take up the manager's post at Stark's Park and led Rovers to the Second Division championship in 2009.

The following year, he led the Fife side to their first Scottish Cup semi-final appearance for nearly 50 years, losing to eventual winners Dundee United.

In season 2010-11, McGlynn was named PFA Scotland Manager of the Year after his side just missed out on promotion to the SPL, but they slipped to seventh last season.

The new Hearts boss said: "I'm looking forward to it and I'm delighted to be back.

"It's been five and half good years at Raith Rovers and I'm looking forward to the challenge.

"It is a wrench to leave Raith Rovers, it's been really good there and we've had some good times, but it's time for a move as well.

"I'm ambitious and I'm delighted to be back in the SPL and with a club that's close to my heart.

"I spent 10/11 years here previously and I know the players and I know the younger players coming through as I've worked with a few of them at Raith Rovers.

"That's obviously the way the club's going to go and I'm looking forward to working with the players."

Hearts previously confirmed that first-team coach Gary Locke would remain following Sergio's departure and would be part of the new coaching set-up.

The Kirkcaldy club's board has already met to consider a successor but said in a statement: "Everyone at Stark's Park wishes to place on record our sincere thanks to John for his professionalism and integrity, for his total commitment to Raith Rovers during his five and a half years with the club and for the significant successes achieved under his leadership."