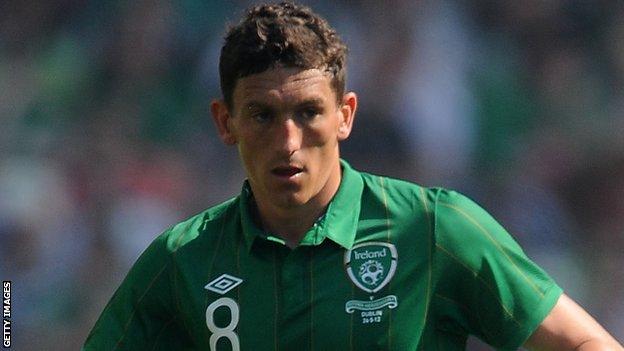 Bolton have completed the signing of Republic of Ireland midfielder Keith Andrews on a free transfer.

Andrews, 31, has agreed a three-year deal with Wanderers after being released by West Brom in the summer.

He started all three group games for the Republic at Euro 2012 and was sent off in the 2-0 defeat by Italy.

"We are pleased to have been able to bring in Keith early in the transfer window as there were a number of clubs interested in signing him," the Bolton boss told the club website.

"He is highly experienced, both in domestic and international football. He will bring strength, competition and a goalscoring threat to our midfield."

Andrews added: "It (the Championship) is a very tough league, but if you have the right characters and the dressing room, you can be successful.

"Looking at our squad, I believe we have a fantastic group of players to tackle the Championship.

"I'm sure there will be a few new signings and fresh faces too, and that can only help the current squad. We are certainly geared up to be fighting for promotion.

Keith Andrews scored twice in 14 appearances for West Bromwich Albion, including a debut strike in their 5-1 victory against local rivals and former club Wolves in February

"I was aware of the manager's interest before the European Championships and I was obviously very flattered by that.

"Every time I have come across the manager, he always seems like a very positive person.

"He spoke to me at length and highlighted his vision for the club, saying how he wanted to get back up to the Premier League at the first opportunity."

Andrews began his career with Wolves, captaining them at the age of 20, and remained at Molineux until 2005 before joining Hull.

He won the League Two title and Football League Trophy with MK Dons and followed manager Paul Ince to Blackburn, then a Premier League team.

After three years at Ewood Park, Andrews enjoyed a prolific loan spell with Ipswich during the first half of last season, scoring nine times in 20 appearances, before he joined Albion on a permanent basis in January.