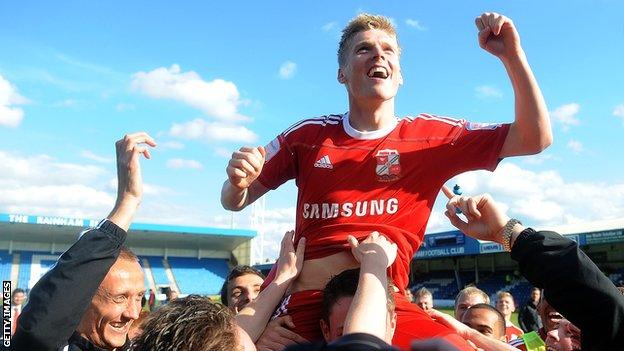 The Robins have also announced that Lukas Magera has had his contract cancelled by mutual consent.

"They could all do a job if we were simply trying to stay in League One," Jeremy Wray told BBC Wiltshire.

"Paolo has made it very clear our ambitions for this season are to win promotion again."

Wray continued: "He feels at this stage we need players who have already had Championship experience or players that are comfortable that could play at that level."

Czech striker Lukas Magera, 29, struggled to make an impact at the County Ground after arriving last summer and was loaned out to Banik Ostrava in January.

And goalkeeper Lanzano and Cox, both 21, were only on the fringes of the first team.

Seven players have already arrived as Swindon prepare for life in English football's third tier and Wray believes the turnover must continue if they are to achieve back-to-back promotions.

"It's testament to the success of the club that we've moved on, and are determined to move on again, and that's the reason they're going," he added.

"There are a number of clubs have expressed interest and we'll put out a statement shortly to make them aware of the players who are available.

The rest of the Swindon squad returned to pre-season training on Wednesday.