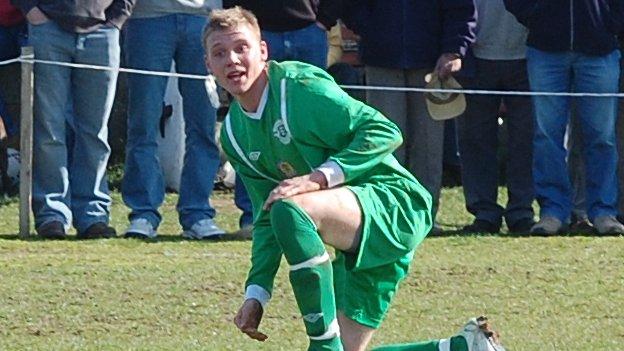 The 23-year-old played in all three games for the Guernsey in the 2010 Uefa Regions Cup and has recovered from a second cruciate knee ligament injury in three years.

"He's a terrific player and will be a good asset," boss Tony Vance said.

Coulter will put pressure on central midfield duo Ryan-Zico Black and Dominic Heaume, but Vance will only have the St Martin's man until November when he goes travelling.

"It's a real shame that he will not be here longer because he could certainly improve us," Vance told BBC Sport.

"He would have definitely been in my squad last year if hadn't been injured.

"He's a very good player who's been very unfortunate with injuries, but I'm really excited about having him back if it's going to improve the team."

Vance says he has also been looking at a number of younger players, including North striker Nigel Hutton.

Hutton was part of Kevin Graham's island squad for the Muratti semi-final against Alderney in March and helped North win their Guernsey 30th title earlier this year.

"Nigel's been training with us, although he's got a bit of an injury now, but he's one that could break into the squad.

"It's a tough squad to break into, we've got some really good player, but it's important their kept on their toes and people try and push themselves and try and get into the squad."