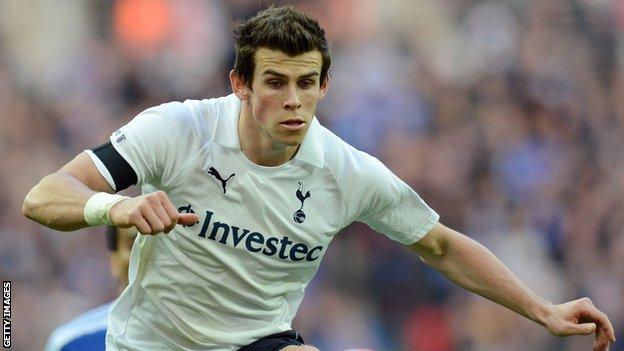 Gareth Bale has signed a new four-year contract with Tottenham Hotspur, the managerless club have announced.

The Wales winger, 22, had been linked with a move away from White Hart Lane, but has committed his future to Spurs until 2016.

"The club is progressing and I want to be a part of that, so it was great to get the deal done," said Bale.

"I've been here for five years now and I've enjoyed every minute. I love the club and the fans."

Bale joined Tottenham from Southampton in May 2007, with Spurs paying an initial £5m.

His eye-catching performances have seen him named in the PFA Premier League Team of the Year in both 2010-11 and 2011-12.

He was also included in the Uefa Team of the Year for last season.

Bale was impressive during Tottenham's run to the Champions League quarter-finals in 2010-11.

That form was recognised in March 2011 when he signed a deal committing him to the north London side until the summer of 2015.

But when Spurs missed out on securing a Champions League place for next season, there was much speculation that he would leave.

Barcelona and Real Madrid were among the clubs linked with the Cardiff-born player, but Bale told Tottenham's official website: "We've a good, young squad and we need to work together to get back on the biggest stage again.

"The fans have been great to me and I'd love to repay them and do the very best for them.

"I want to play my part in trying to get us back into the Champions League - where we belong."

Tottenham have been without a manager since Harry Redknapp was sacked earlier this month after almost four years in charge.

But Bale's decision to commit his long-term future to Tottenham suggests the club is close to naming a replacement for Redknapp, with Villas-Boas favourite to land the role.