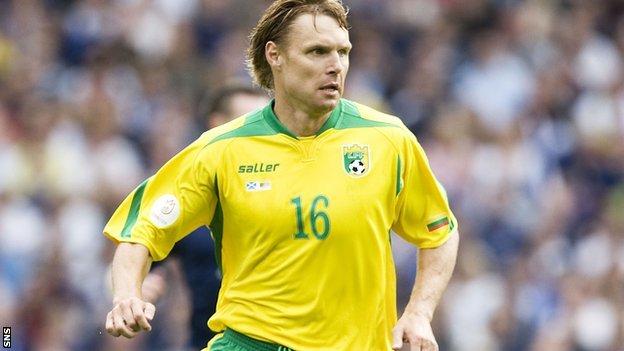 Edgaras Jankauskas has rejoined Hearts as assistant manager, the club have confirmed.

Jankauskas spent two years at Hearts on loan from FBK Kaunas and won the Scottish Cup with the Tynecastle side in 2006.

"He'll slot in perfectly to the coaching set up here," manager McGlynn told the Hearts website.

Former Lithuania international Jankauskas player for Hearts when McGlynn was also part of the club's coaching team in 2005.

Most recently, the 37-year-old was assistant manager to Jose Coucheiro at Locomotive Moscow but also has strong ties with Hearts owner Vladamir Romanov.

The move from Porto to Tynecastle came via Kaunas, a club also controlled by Lithuania-based businessman Romanov.

Jankauskas played 47 times during his two years on loan with the Scottish Premier League club before heading for Larnaca.

He went on to play for Belenenses, Skonto Riga, Vilnius and New England Revolution before retiring last year after a short spell with Fakel Voronezh in Russia's second tier.

McGlynn completed his own return to Hearts last week when he left Raith Rovers to replace Paulo Sergio.

And Craig Levein has welcomed the appointment of McGlynn, who was the Scotland coach's number three while he himself was boss at Tynecastle.

"I hold John in the highest regard," Levein told Hearts' website. "He has done a brilliant job at Raith Rovers and I have huge admiration for him.

"He is absolutely the perfect man for Hearts given the road the club has decided to go down.

"Nobody will work harder or have greater knowledge of the club or youth set-up than John.

"He is a top bloke, works hard and knows the game inside out."