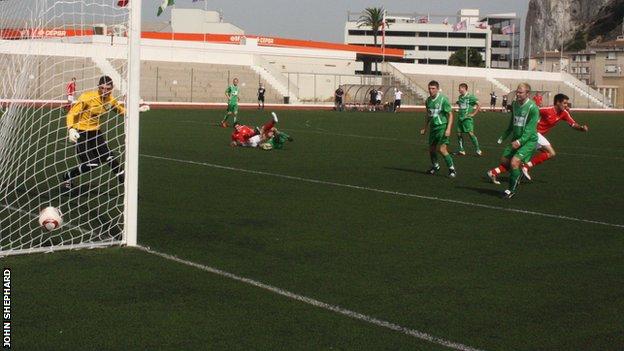 Russell opened the scoring from close range early on and rounded the keeper to net his second.

Jack Boyle sealed the win late on when his left-footed effort flew into the back of the net from 25 yards.

Jersey will face hosts Gibraltar in the final, with Guernsey taking on the Isle of Man in the third-place decider.

It's incredibly hard to play in those conditions

Despite the margin of their victory, Jersey boss Craig Culkin insisted his side were not getting "carried away".

He said: "We're certainly pleased with some of the under-18s performances - Jay Giles, in particular, I thought was outstanding.

"Following the 2-0 defeat to Guernsey in the Muratti (last month), we had to go back to basics.

"I thought collectively as a unit the back four and the goalkeeper, Jordan Le Guyader, another under 18, were absolutely fantastic."

Guernsey had plenty of possession during the game, but Jersey looked sharper in front of goal in the scorching Gibraltar heat.

"We've chatted to them and said to be very proud of how they played.

"It's very, very warm and incredibly hard to play in those conditions, but I think they've played a good standard of football."

Gibraltar beat the Isle of Man 2-0 in the other semi-final.