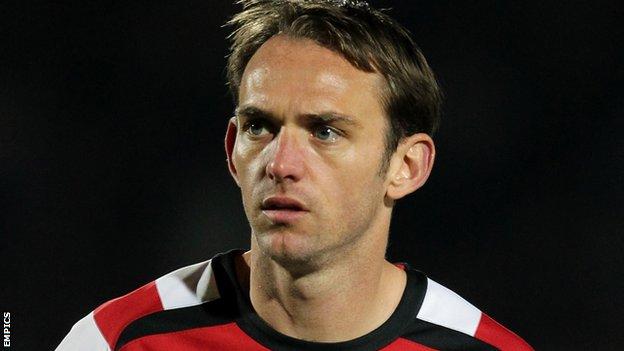 McAllister, 34, was released by Bristol City last month after a six-year stay at Ashton Gate.

"I've got a lot of youngsters, I need a little bit of experience about the place," Yeovil manager Gary Johnson told BBC Somerset.

The striker still holds the record for the fastest ever Football League hat-trick during his time at Bournemouth, where he scored three in two minutes and 20 seconds.

Glasgow-born McAllister, who won one Scotland cap in 2004, had a spell at Preston last season but returned to help the Robins avoid relegation.

The left-back has also made over 500 appearances for Hearts, Livingston, Aberdeen and Queen of the South, and having signed such an experienced player, Johnson said McAllister is in the running to be the Glovers skipper.

"He's captain material and even if he wasn't wearing the armband, he'd walk around and play like a captain," he added.

"If he gets it, good luck to him, we'll see how pre-season goes, but he certainly will be one that ticks all the boxes for that.

"There is a few bits a pieces that have still got to happen [with other transfers] and that'll be one or two lads in the next couple of days.

"We've worked very hard over the summer and we've managed to get a good strong squad of 16 lads who will all be announced at the time."