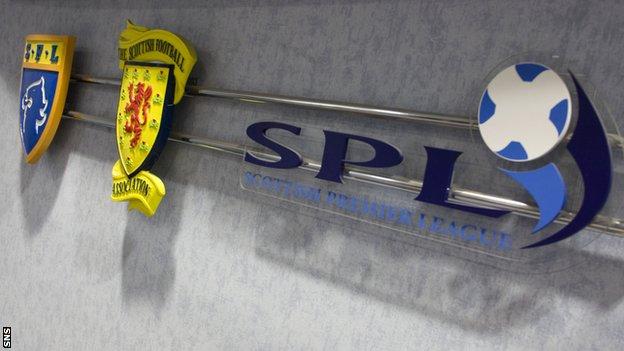 BBC Scotland has learned of plans being put in place that would allow Rangers to move directly into Scottish Division One in the coming season.

Rangers FC plc is soon to be liquidated and Charles Green's consortium are reforming the club.

But Green's Rangers newco has not gained support to replace the old club in the Scottish Premier League.

And senior Scottish football figures are proposing that Rangers start season 2012-13 in the second tier.

There are also plans for the SPL and Scottish Football League bodies to be merged into a new organisation called 'The Scottish Professional Football League' in 12 months' time.

SFL chief executive David Longmuir confirmed: "The SFL is trying to address the question of whether we are in a position to accommodate a solution to the Rangers FC scenario.

"We are trying to achieve a solution which will be in the best interests of the SFL and the wider game."

The main points of proposal documentation viewed by BBC Scotland are:

It is understood Rangers chief executive Green has been "briefed" by Hibernian chairman Rod Petrie on the plans to gain their approval.

All changes have to be approved by SPL and SFL clubs over the next few days. The plans require the support of eight SPL clubs and a majority of SFL clubs to be passed.

Aberdeen chairman Stewart Milne commented: "Rangers Newco should apply to the SFA for admission and apply direct to the SFL in the same way that any other new club would do.

"This is and remains our clubs absolute position."

Should the proposals not gain support, it remains possible that Rangers could begin next season in Scottish Division Three, the lowest league in the senior set-up.

Division One clubs Falkirk, Raith Rovers and latterly Morton have voiced their opposition to any plans to place the Rangers newco in the second tier.

With no Rangers currently in the SPL, 'Club 12' is listed on the league's fixtures for season 2012-13 and Dunfermline, who were relegated from the top flight last season, expect to be reinstated.

Dundee, who finished second to promoted Division One champions Ross County last season, have not gone public with their view on who should take the place of Club 12.

Dunfermline chief executive Bill Hodgins said: "I can't see any justification for this decision. We certainly haven't had any dialogue with any of the governing bodies.

"I think everyone's aware that the game in Scotland needs a major shake-up and a number of the proposals look exciting and look what's required.

"We are just quite surprised at the one the that refers to Dundee taking the place of Club 12 instead of Dunfermline. We're quite bemused at that decision."

Longmuir said the SFL had held "intensive discussions" with the SPL, Scottish FA and other stakeholders "to try and address, in a positive way, the current critical issues affecting our game".

And he added: "The SFL will send a briefing document to its member clubs - a logical and positive communication which will hopefully eliminate some of the understandable doubt, threats and insecurities that are apparent within the game at the moment.

"The consultation document will fully explain the short and long-term benefits of a number of scenarios which we will be considering at a full club meeting next week."