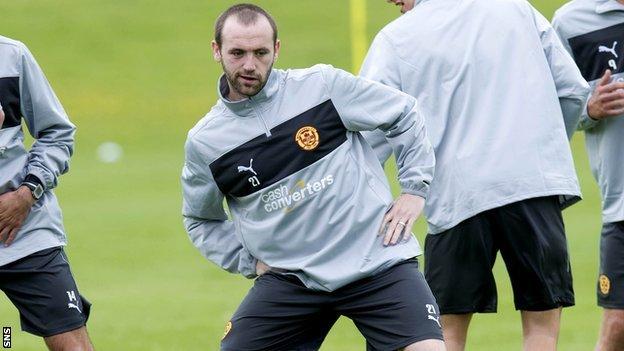 James McFadden has started pre-season training with Motherwell, but Stuart McCall doubts they will be able to offer the Scotland forward a contract.

Trialist Simon Ramsden, previously of Bradford City, is a more likely signing as Well are looking for a defender.

"We're allowing James to train, which is good, but there is very little chance of him joining us obviously," said Well manager McCall.

"Unless he wants to play centre-half and play for nothing."

Now, I can't even get near anyone's wages down in England

But McCall, who had already had £200,000 cut from his budget before the financial uncertainty sparked by the collapse of Rangers, has made his priority replacing Tim Clancy, who joined Hibernian, and retired captain Stephen Craigan.

"Losing Clancy and Craigan, it's imperative we get a centre-back in," he said.

The 30-year-old Ramsden, who has not accepted a new contract offer from McCall's former club, Bradford, on reduced terms following injury problems, will hope to prove he can fill the void.

And McCall highlighted the difficulty of affording replacements despite the club preparing for their debut in the Champions League qualifiers.

"Steve Jennings, through his agent, told us last week he probably wouldn't be back," he said.

"Maybe a lot of what's happening with Scottish football at the moment is going through his head.

"We are threadbare to say the least. If we compare it with other SPL clubs, it might be similar.

"With what's on the horizon with the Rangers business, clubs are going to have to cut their cloth accordingly."

McCall warned Motherwell fans not to expect the quality of signings they have been accustomed to in recent times.

"Last season, we were fighting with League Two and some non-league clubs in terms of wages," he said. "Now, I can't even get near anyone's wages down there.

"Don't get me wrong, there are still lads in England that would like to play in Scotland.

"The selling point used to be playing against the Old Firm and being on TV a lot and putting themselves in the shop window.

"But it's biting everywhere, Scottish football financially is struggling. There is a little bit of that going on in England.

"Even now, the clubs that let their players go out on loan want money for them."

The 29-year-old McFadden, a product of the Fir Park club's youth system, was released by Everton this summer at the end of his second spell at Goodison Park.