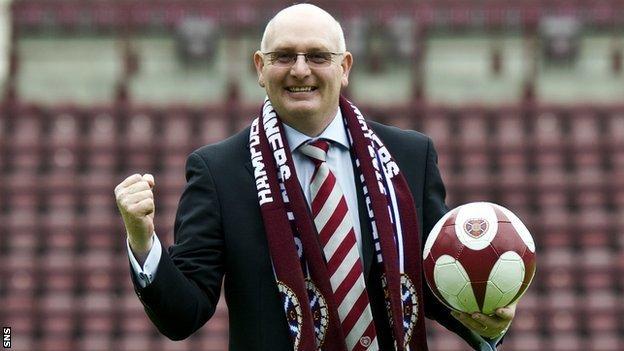 New Hearts manager John McGlynn does not expect "huge funds" to enhance the Tynecastle squad but is confident of increasing his player pool.

McGlynn has returned to the club six years after leaving his post as first-team coach.

My heart lies with Hearts. I know the people here and it's not a massive change for me

"There are one or two areas in the team, because players have moved on, where we are short," McGlynn said.

"We'll do the best we possibly can to bring in players.

"I had to work on a very tight budget at Raith. I had to wheel and deal and duck and dive and bring in loan players.

"Whether that can be available here remains to be seen, but I've certainly worked on a shoestring budget.

"I've worked with young players, players that have come from Hearts and done a really, really good job.

"I've got the opportunity now to work with guys like Jamie Walker, Jason Holt, David Smith, Denis Prychynenko, the guys who were at Raith Rovers last year."

McGlynn would not confirm whether former Hearts striker Edgaras Jankauskas will be joining the club's coaching staff, of which he said: "We're very happy with what we've got and we're looking forward to it."

A former PFA Scotland manager of the year, McGlynn was linked to other vacancies during his spell at Raith, with whom he won the Second Division in 2009.

"I'm not necessarily one for saying what's for you won't go past you, but it may very well have worked out in this case," he added.

"Maybe missing out on one or two jobs has meant I'm still available to take this job on.

"If there was a script that was written, it would have been to come back to Hearts because my heart lies with Hearts.

"I know the people here and it's not a massive change for me."