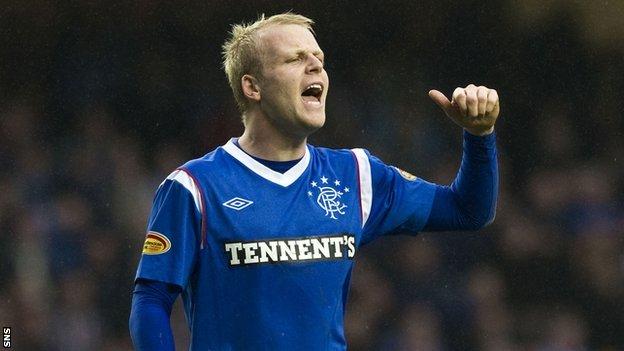 Everton are among six clubs from England's top flight expressing an interest in signing Steven Naismith, BBC Scotland has learned.

The Scotland forward is controlled by Charles Green.

Two overseas clubs are also showing an interest in the 25-year-old.

Naismith, who has been capped 15 times for Scotland, joined Rangers from Kilmarnock in 2007.

But he is one of nine players who have told Green, whose consortium is trying to relaunch Rangers as a new company, that they do not wish to transfer their contracts from the old Rangers.

With the backing of the players' union, the players claim to now be free agents despite Green threatening legal action and promising to pursue compensation.

The forward said then that there was too much uncertainty about which division the club would be playing in next season and that his loyalty was to the old Rangers and not the Sevco consortium.

It now looks almost certain that the new Rangers will not be admitted into the Scottish Premier League and will either play in Division One or the Third Division next season.

Stoke City look poised to sign 21-year-old midfielder Jamie Ness following his decision to reject a move to the newco.

Whittaker is also believed to be attracting interest from a number of clubs similar to Naismith, for whom Rangers rejected an offer from English Premier League outfit West Brom in April.

Naismith has made 141 appearances for Rangers, scoring 33 goals, but missed most of last season after picking up a cruciate ligament injury in October.