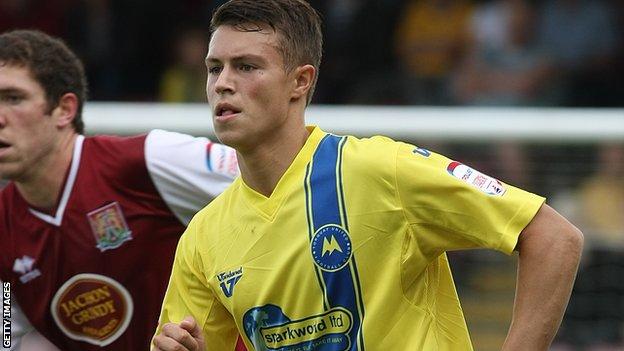 Torquay United has a bid in the region of £40,000 for Swindon Town's 20-year-old midfielder Billy Bodin rejected.

The Wales Under-21 international spent a successful spell on loan at Plainmoor during the first half of last season, making 19 appearances.

But Swindon chairman Jeremy Wray says it is likely that out-of-contract Bodin will leave the Robins.

"I think it's appropriate that he does find another club at this stage," he told BBC Radio Wiltshire.

"The date's been set for when players have got to sign and I think it's no secret that on the basis that he hasn't signed, Billy is looking for other opportunities.

"He will have seen the forwards that we have brought in and he will be realistic as to where Paolo will see him in that pecking order."

Gulls boss Martin Ling has made no secret of his desire to bring Bodin back to the club.

He scored five goals in his 19 appearances for Torquay between August and January last season and had a spell on loan at Crewe earlier this year, who are also

Torquay have already brought in around £400,000 in transfer fees from the sales of goalkeeper Bobby Olejnik and centre-back Mark Ellis.

"I'm sure that he will find a club in the not too distant future and we'll sort something out with them.

"Nothing's resolved at the moment but I think it's fair to say that Paolo has not got him in his plans for next season," Wray said.