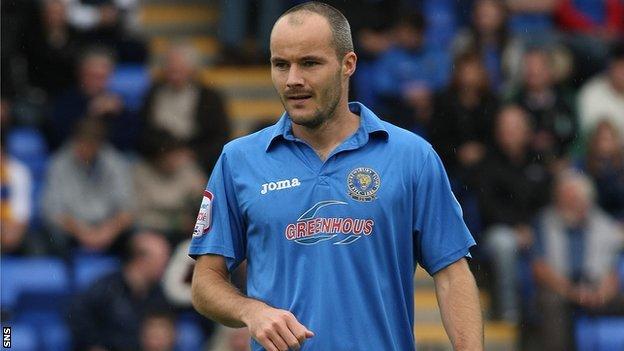 Former Real Madrid youth goalkeeper Antonio Reguero is to join Inverness Caledonian Thistle and they have announced two other signings.

Joining him at pre-season training will be 27-year-old right-back David Raven, who has left Tranmere Rovers.

Also arriving on Friday is 19-year-old striker Jason Oswell, who was part of the youth set-up at Crewe Alexandra.

The 29-year-old Reguero spent last season with Gandia in the fourth tier of Spanish football.

But he came through the youth set-up at the Benabeu and graduated to the first-team squad in 2002 before a serious knee injury hampered his progress.

He has since had spells with Villareal, Orihuela and Alicante and manager Terry Butcher thinks the Spaniard can challenge Ryan Esson for the first-team jersey.

"He wants to play in Scotland and he came up and played a trial at the end of last season and we liked him and he liked Inverness," Butcher told his club website.

"They've all agreed to sign and the trio will be challenging for a first-team place from day one."

Birkenhead-born Raven came through the youth ranks with Liverpool but made only one first-team appearance and, after a loan spell with Tranmere, moved to Carlisle United.

The former England Under-23 international had a season with Shrewsbury Town before being released by Tranmere this summer after making 20 appearances when spending last term back at the League One club.

Oswell has parted with Crewe, who have been promoted to League One, without making a first-team breakthrough despite being praised for his form while on loan last season with Welsh League outfit Rhyl.

"Jason's a finisher whose best is yet to come and we're excited about his potential," said Butcher.

"David's got a solid footballing background and, though primarily a right-back, he gives us the option of playing him anywhere in the back four."

Butcher had been hoping to sign up to seven players ahead of the start of pre-season training.

Until the latest announcements, only former Newport County central defender Gary Warren had been confirmed.

"Their arrival is a timely boost and we are in advanced negotiations with a view to adding another couple of new recruits next week," added Butcher.