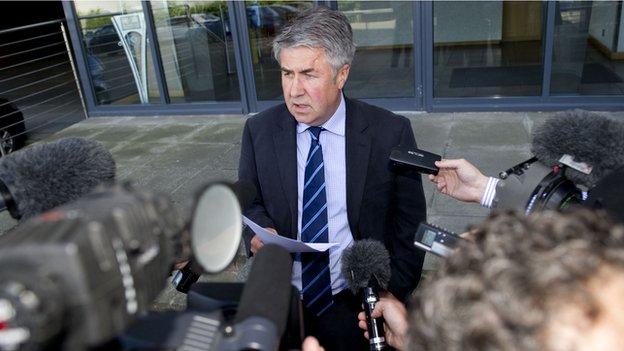 Chairman Malcolm Murray has pleaded for an end to "the vicious and gratuitous blood lust" among those vying to control Rangers' destiny.

And he says that "measures have been implemented to ensure" that former owner Craig Whyte "could not return to the club in any way".

Former Rangers player John Brown this week announced he was leading a group looking to buy the club.

But Murray has urged those behind the bid to unite with the new owners.

The chairman's statement came on the day when BBC Scotland revealed plans by football authorities to put the new club in Division One next season.

Rangers FC plc is heading for liquidation and a consortium led by Charles Green has bought the assets but looks unlikely to win enough votes to have its new club admitted to the Scottish Premier League.

The Sevco consortium has already rejected two offers since buying the club for £5.5m two weeks ago and this week faced a protest by 1,500 Rangers fans, who were addressed by Brown.

And, with the consortium being accused of a lack of clarity about its funding and future plans, Murray responded with a lengthy statement.

"Staff and players were paid this month as normal and will continue to be while the club operates and functions normally," he said on the day when 13 players reported back for pre-season training minus the nine who have refused to join the new company.

"The club is funded by the new owners and working capital is in place for the foreseeable future.

"In the coming weeks, we will be announcing details of how fans can invest in the club and fan ownership is one of the cornerstones of our philosophy.

"It also remains our firm intention to re-list Rangers as a publicly quoted company on an appropriate stock exchange at the earliest opportunity."

Murray pleaded with former player and coach Brown and his backers to invest in the newco instead of harming the club through a call to boycott season tickets.

"He has my number and, if he has investors, we welcome them and do not see why they have to be separate to our current long-term investors," he said.

"Events have triggered a frenzy of emotion around the club, to the point where the only people who stepped up to buy the club and begin the long and arduous task of restoring and rebuilding Rangers are now being vilified by people who claim to have the interests of the club at heart.

"This is deeply depressing and such factionalism can only undermine efforts to make Rangers once again the great sporting institution is has been for generations.

"The vicious and gratuitous blood lust of recent times must end, not only for Rangers' sake but for Scottish football too.

"Certain individuals must ask some searching questions of themselves as to what their true motives have been over the last few months and as to whether they really have the best interests at heart of the club they claim to love and support."

Murray sought to allay fears by stressing that Ibrox Stadium, the Murray Park training ground and the Albion car park were all the property of The Rangers Football Club, "which at present is registered as Sevco Scotland Ltd until a name change is given formal approval".

"For the avoidance of doubt, Craig Whyte has no involvement with the club, in Sevco, The Rangers Football Club or any other of the consortium members," he added.