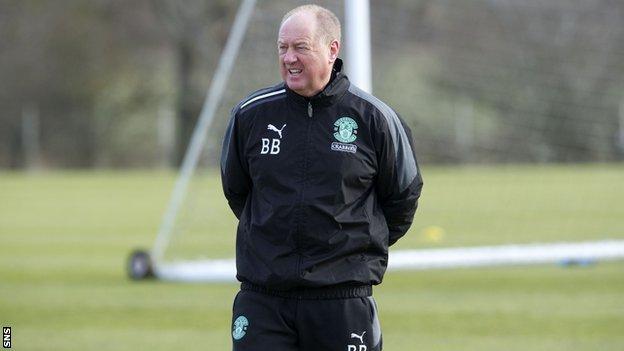 Billy Brown has left his position as assistant manager of Hibernian.

The club confirmed that the 61-year-old's contract is not being renewed beyond its 30 June expiry date.

The former Hearts assistant boss said: "I thought it was going to get renewed but the financial reality has kicked in and the club said they couldn't afford it. Unfortunately it is over."

Brown joined Hibs last year when Colin Calderwood was in charge and stayed on when Pat Fenlon took over in November.

"I can understand it; it's football," Brown told BBC Scotland.

I'm sure he'll be back in football before too long

"Pat's there and he brought [coach] Liam [O'Brien] so obviously there isn't a wage for somebody else.

"One of the big disappointments is that my last game was the cup final [a 5-1 defeat to Hearts], which was a disaster.

"It was a difficult time. I felt I could have done a bit more - maybe I wasn't the influence there that I was in other places.

"But I haven't many complaints, they're a good club and I hope they prosper."

Fenlon told the Leith club's website. "I'd like to thank Billy for the contribution he's made since I've been at the club.

"His experience and knowledge of Scottish football is second to none and I was delighted that he agreed to stay on when Liam and I first came into the club.

"With the reputation that Billy has I'm sure he'll be back in football before too long."

Brown was twice assistant to Jim Jefferies at Hearts and the pair also worked together at Bradford City and Kilmarnock.

Hibs also stated that director Fife Hyland has formally left the club after stating his intention to do so last year, with chairman Rod Petrie thanking Hyland for "the experience, flair and acumen that he brought to the club".