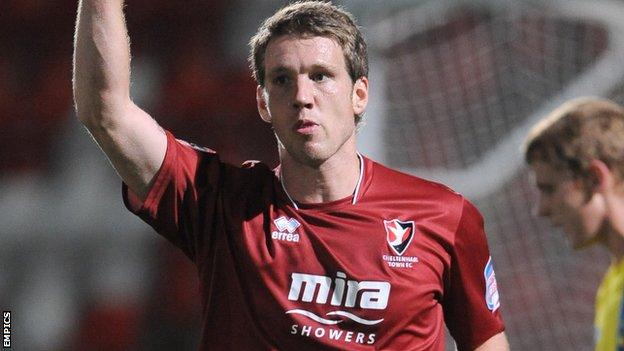 The 28-year-old forward found himself on the fringe of the starting XI last season, with 25 of his 45 appearances coming off the bench.

We've go the nucleus of a really good side, we're obviously going to take a couple of loans and things will happen over the next two or three weeks

But Goulding, who scored six goals last term, signed a new deal last week to keep him at the club until next summer.

And Yates told BBC Gloucestershire: "I think he is ready to play a big part and hopefully that will be the case."

He added: "I think Jeff is ready for it. He knows how much I rate him and I think his attitude has been spot on."

Goulding, who has been with Cheltenham since making his move from Bournemouth in June 2010, is one of six players to commit their future to the League Two side, who lost out in this year's play-off final to Crewe.

Speaking about Lowe's decision to stay, Yates said: "Keith gives me balance, a steadiness and I think he could of been guaranteed to be playing first-team football at other league club's, but I'm just delighted we've got him.

"We've all seen what he can do and he has to step up again now. He's one for the future and whether that is straight away this season or three months into the season it's up to him to grab the shirt."

Yates has yet to bring in any new faces to the club, but has outlined potential targets: "I think things will start to pick up pace.

"I'm after four or five more players now and a couple before the start of the season.

"Once we get the first one it will determine where we go with one or two others.

"We've go the nucleus of a really good side again and we're obviously going to take a couple of loans and things will happen over the next two or three weeks."