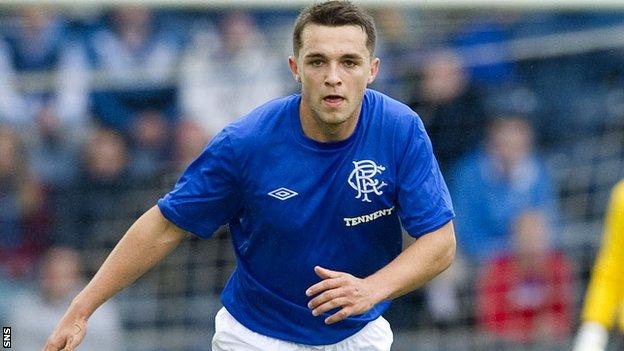 Chris Hegarty, who was out of contract with Rangers, has signed on to play for the 'newco' Ibrox club.

The central defender, who captains Northern Ireland Under-21s, has agreed a one-year deal.

Hegarty, 19, was a regular on the subs' bench at the end of last season but has yet to make a first-team appearance.

Salim Kerkar, Andrew Mitchell and Scott Gallacher were the other out-of-contract

The manager made it clear I was in his plans

"I'm delighted to have some certainty about my position and I said all along that I'd come back after the summer ready to play for Rangers and do my bit to help get them win whatever league they play in," said Hegarty.

"I don't care if we're in a different league, I don't even care if something about the name has to change, we are the same club with the same supporters and goals we score will be celebrated the same way - I just hope I'm involved in some.

"I'm champing at the bit to show what I can do next season.This is a big opportunity for the younger guys and the manager has faith in us, which helps.

"Ally McCoist and his management team have been great for me and since I joined the first team they've given me the belief that I belong here, I'm grateful to them for the opportunity and will try not to let anyone down.

"Obviously it was a summer of uncertainty for me being out of contract but the manager made it clear I was in his plans and my agent and I agreed to let the club sort out the bigger issues before chapping on the door.

"Everyone's been good to their word."