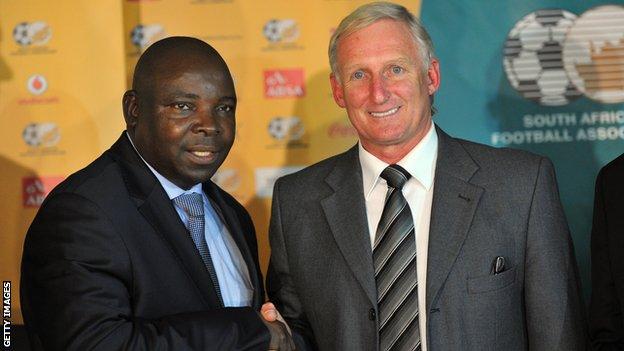 Gordon Igesund has been appointed as the new head coach of Bafana Bafana, the South African FA (Safa) announced on Saturday.

Veteran coach Igesund was preferred to former captain Steve Komphela, who was also in the running for the post.

He replaces Pitso Mosimane, who parted company with Safa earlier this month.

Igesund has been given a two-year contract and tasked with reaching the semi-finals of the 2013 Africa Cup of Nations which South Africa will host.

He has also been mandated with qualifying the country for the 2014 World Cup in Brazil.

"It was not an easy decision," Safa President Kirsten Nematandani said.

"Both coaches [Igesund and Komphela] are well equipped to take Bafana Bafana forward.

"At the end of the day, it was a unanimous decision and we think the final verdict was in the best interest of the nation."

Igesund has just seven months to prepare his squad for the Nations Cup finals on home soil.

Bafana Bafana have failed to qualify for the last two continental tournament finals and despite contesting the 2008 edition, their last win in a Nations Cup match came in a victory over Benin in 2004.

During the intervening period, Bafana Bafana did manage to win a match at the 2010 World Cup, beating France in the group stages, as South Africa hosted the finals.

After that tournament, local coach Pitso Mosimane took charge of the side but he was axed earlier this month after failing to beat Ethiopia in a World Cup qualifier at home.

It marked the eighth month that Bafana Bafana had gone without a win, although caretaker coach Komphela addressed that statistic when overseeing a 3-0 friendly win over Gabon on 15 June.

South Africa's on-field preparations for the Nations Cup step up a notch when they take on 2014 World Cup hosts Brazil in Sao Paolo in September.