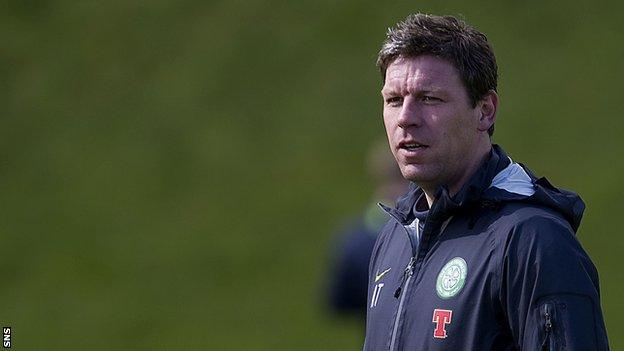 Celtic have announced they have settled with Alan Thompson over his dismissal from the club's coaching staff.

Thompson's contract was terminated earlier this month and he instructed his lawyers to act over the issue.

But the club have issued a statement saying they have reached an agreement to "amicably settle" the dispute.

Thompson, 38, won four Scottish Premier League titles and five domestic cups as a player at Celtic during a six-and-a-half-year spell.

He returned to Celtic Park as a coach in June 2010, alongside assistant manager Johan Mjallby.

A statement on the club's website read: "Celtic PLC and Alan Thompson are pleased to advise that they have reached an agreement to amicably settle their legal dispute.

"Celtic PLC extend their thanks to Alan for his services to the club as a top-level player and a first-class coach.

"Alan would like to express his deep gratitude for the overwhelming and heartfelt backing he has received from Celtic fans everywhere, and for the support of his legal team at Bridge Litigation UK Solicitors.

"Alan intends to continue his coaching career, building on the invaluable experience gained during his time with Celtic.

"Alan wishes Celtic Football Club and the fans every success for the future.

"Celtic would like to thank Alan for the contribution he has made to the club over a number of years as both a player and a coach, and we sincerely wish him well for the future."

Thompson was capped once for England and featured in Celtic's run to the Uefa Cup final against Porto in 2003.

He had a coaching role with Newcastle, with whom he started his playing career, before he returned to Glasgow to be reunited with former team-mates Lennon and Mjallby at Celtic.