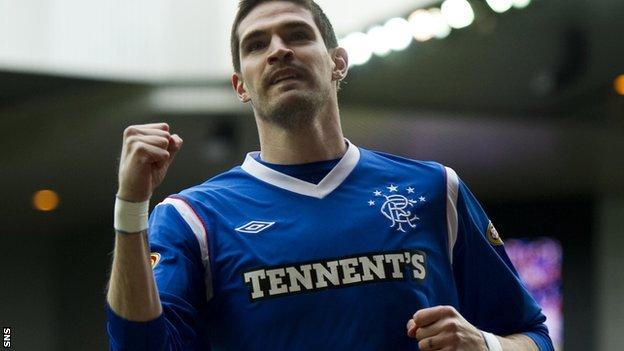 Northern Ireland striker Kyle Lafferty has joined Sion on a three-year deal after saying he wished to leave Rangers, the Swiss club have confirmed.

"He will be presented at a press conference on Monday, then will join his new team-mates for training," the Swiss club said in a statement.

Rangers's new owners have vowed to challenge such moves in the courts.

Lafferty played more than 100 times for Rangers since joining from Burnley for £3m, with forward Alan Gow heading in the other direction, in 2008.

But the 24-year-old might not find his switch is quite as smooth this time around.

BBC Scotland understands the Scottish Football Association could reject an application for international clearance from their English and Swiss counterparts on behalf of he and Whittaker's new clubs.

Scotland's national body claims it would require both the "old" Rangers, which will soon be put into liquidation, and the newco Rangers to give their permission for such clearance to be given.

The players, on advice from their union, PFA Scotland, rejected the opportunity to have their contracts transferred to the "newco" Rangers being created by the consortium led by Charles Green that has bought the Glasgow club's assets.

World governing body Fifa is likely to step into the dispute and grant international clearance for the pair.

However, Green's Sevco consortium rejects the claims of Lafferty, Whittaker and seven other players that they are now free agents.

Green has threatened legal action against any player who signs for another club - and will seek compensation from any club trying to employ them.

His consortium claims that Rangers players agreed to remain at Ibrox on reduced wages while the club were in administration in return for being sold at reduced prices should they go into liquidation.

So there could well be a lengthy dispute between the "newco" Rangers, Norwich, Sion, Lafferty and Whittaker.

Stoke City are in a similar position, although they have yet to formally announce that they have signed Rangers midfielder Jamie Ness.

At Sion, Lafferty will join up with another former Rangers player, Rino Gattuso, the 34-year-old midfielder having signed for the Swiss after exiting AC Milan.