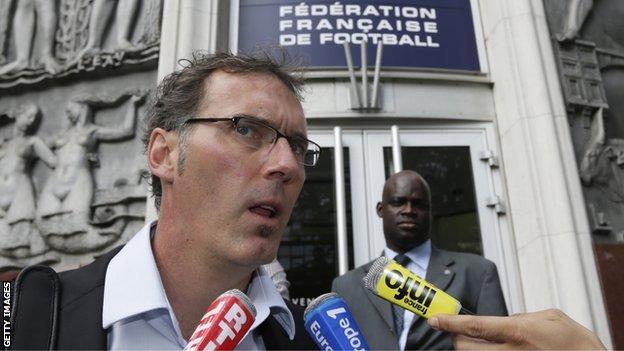 Laurent Blanc has left his job as manager of the French national team after his contract came to an end.

The 46-year-old, who has been linked with the vacant Tottenham post, took over from Raymond Domenech in 2010.

Like his predecessor, Blanc endured infighting between players which he admitted had been a distraction before their Euro 2012 quarter-final defeat against Spain.

Despite France's disappointing performance at Euro 2012, former Manchester United defender Blanc had initially been expected to carry on in the role for another two years.

However, following a long meeting with French Football Federation president Noel Le Graet on Thursday, both sides said they would take time to consider their positions.

Now Blanc has decided the time is right for a new challenge, and an FFF statement read: "Within the period provided for reflection, Laurent Blanc contacted Noel Le Graet to indicate his decision not to seek the renewal of his contract of national coach.

"Mr Le Graet has acknowledged and applauded the work of Laurent Blanc at the head of the France team since August 2010."

Blanc had taken France to Euro 2012 on a high, with their 23-match unbeaten run only ended by a 2-0 defeat to Sweden in the last group game of the competition.

But stories of infighting resurfaced once again, and finishing second to England in Group D meant they came up against world and European champions Spain in the quarter-finals.

"Blanc has done exceptionally well with the national team. There has been problems for the French over the last couple of campaigns and it will have been an experience for him but he is still young in his managerial career and will be looking to get back into club football."

Les Bleus's campaign ended on the worst possible note after their 2-0 defeat to Vicente del Bosque's side, with Manchester City midfielder Samir Nasri involved in a row with a journalist for which he later apologised.

The French side also suffered criticism from previous manager Domenech, who said: "A major tournament reveals the strength of a group, a generation. The most glaring [weakness is] their inability to see anything other than their navel."

Blanc previously impressed as manager of Bordeaux, guiding the Ligue One side to a league and cup double in 2009.

As a player, he played for some of the biggest clubs in Europe including Barcelona, United and Inter Milan.

He earned 97 caps for his country and won the 1998 World Cup, although he missed the final having been sent-off in the semi, and experienced success two years later after victory over Italy in the European Championship final.

France's next fixture is a friendly against Copa America champions Uruguay on 15 August, before they begin their 2012 World Cup qualifying campaign against Finland on 7 September.