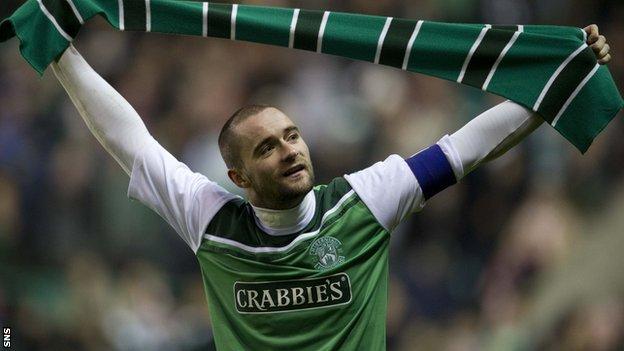 Defender James McPake has signed for Hibernian on a permanent two-year deal after impressing on loan from Coventry City last season.

Coventry have allowed the 28-year-old Northern Ireland international to move without a transfer fee.

Hibs manager Pat Fenlon said: "It's absolutely fantastic that we've been able to bring James back to the club.

"We have had to be patient and persistent, but all the work has been worthwhile."

McPake, who had fallen out of favour at the then Championship club, had moved to Easter Road in January but ended his spell there with his first call-up for Northern Ireland.

He captained the Edinburgh side and, in his 15 appearances, helped Hibs reach the Scottish Cup final and avoid relegation from the Scottish Premier League.

"Every team needs a strong leader and James is my captain," Fenlon told his club website. "He leads by example and sets himself high standards.

"He made a really positive impact during his loan spell and, moving forward, he will play a major role in the ongoing development of the club over the next few seasons."

Fenlon has already signed Tim Clancy after the defender left Motherwell as the Irish boss looks to reshape his side.

"With the arrivals of Tim and now James, we have started to make good progress towards rebuilding the squad and bringing in the right characters," said the manager.

"There is much more to be done and we will keep working away trying to secure our other targets."

Scottish-born McPake, who joined Coventry from Livingston in 2009, is delighted to be making the switch.

"From day one, I felt at home at the club and I developed a special relationship with the supporters," he said.

"I'm excited to be part of what will be a new-look Hibernian team and I'm looking forward to playing my part in bringing success back to this football club."

Coventry development director Steve Waggott said McPake leaves with the blessing of the club relegated to League One.

"He was keen to return to Scotland and to play in the Premier League and lengthy negotiations have taken place to allow that to happen," he told his club website.

"Meanwhile, we are working tirelessly in pursuit of our own targets as we look to put together a squad capable of challenging next season."