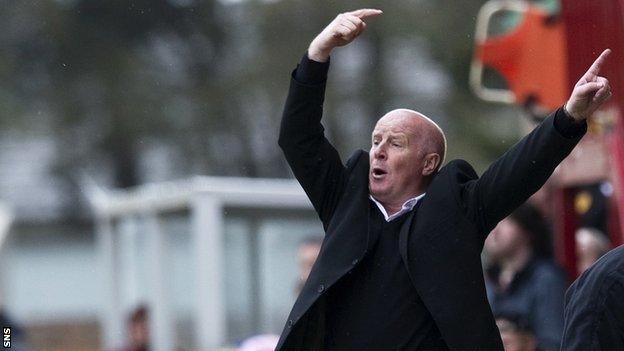 Dundee United manager Peter Houston says future signings and his contract renewal talks have been put on hold due to current financial uncertainties.

United are one of the majority of top flight clubs opposed to the Rangers newco replacing the old club in the Scottish Premier League.

Rangers' absence from the top flight is likely to reduce other clubs' income.

"We have to hold back. We don't know what's going to happen over the next month or so," said Houston.

I'm settled at United and I enjoy it

"I would've liked to have brought another player in, an experienced player which I hope to get.

"But I understand the chairman having to pull the strings back and say, 'hold it just now until we find out what's going on'.

"I was trying to bring in an experienced player to help some of our younger ones, we were speaking and the chairman was keen for that to happen.

"But I can understand fully that we'll have to go with what we've got just now.

"[The chairman] has more concerning things with regards to: are we going to be able to afford everything that's going on, are we still going to have a television deal?"

Houston, who has signed four players after losing six from last season's squad, has been in charge at Tannadice since 2010 and chairman Stephen Thompson recently indicated a contract extension would be tabled to his manager.

"We've put [my contract talks] to the back burner," Houston told BBC Scotland.

"We have provisionally spoken but there isn't anything on the table for me to digest but I can understand why."

However, Houston insists he is no hurry to leave Tannadice.

"I enjoy it at United," he added. "When you've got a good bunch of players who work extremely hard, why would you want to go and change anything?

"I'm ambitious like everybody else. If something bigger came along then I'm no different from any other manager, I'd have to consider it.

"But I'm settled at United and I enjoy it."