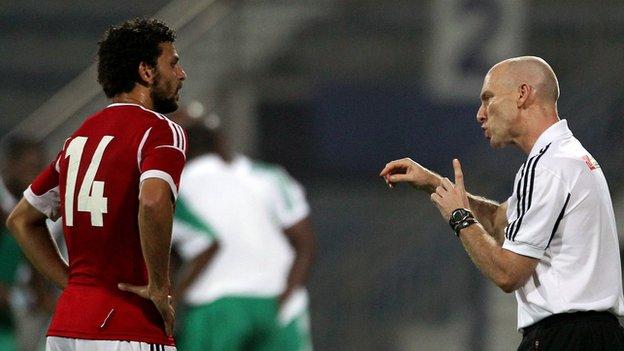 Egypt coach Bob Bradley insists his priority is taking the Pharaohs to the 2014 World Cup - after they were knocked out of qualifying for the Africa Cup of Nations in 2013.

Egypt were held to a 1-1 draw in the second leg of their Nations Cup qualifier against Central African Republic on Saturday, sending them out of the tournament 4-3 on aggregate.

It means the Pharaohs, who are seven-times African champions, will miss the Nations Cup for the second year in succession.

"The priority is reaching the World Cup, the Nations Cup was a secondary objective," Bradley told Egyptian newspaper Al Ahram after the game.

"I'm not exonerating myself from responsibility, but our Nations Cup defeat is not the end of the road."

Egypt may be out of South Africa 2013 but they have had an excellent start to the campaign to reach the World Cup in Brazil 2014.

Bradley has led them to two wins out of two, a home victory against Mozambique followed by an excellent 3-2 away win against highly-fancied Guinea.

The American coach pointed out that football in Egypt had been thrown into turmoil by the country's political revolution - and that the game had been seriously disrupted by the violence which killed more than 70 people at a match earlier this year.

"I took charge of the team amid very difficult circumstances, but we managed to top our group in the World Cup qualifiers despite football suspension in Egypt," he said.

But whether Bradley gets the chance to complete his goal of taking the Pharaohs to the World Cup is still in question.

The BBC's Inas Mazhar in Cairo reports that some members of the country's football association would like the American to leave, following the failure to make it to South Africa.

Bradley took over in September last year but had to wait until June this year to take charge of his first competitive game.