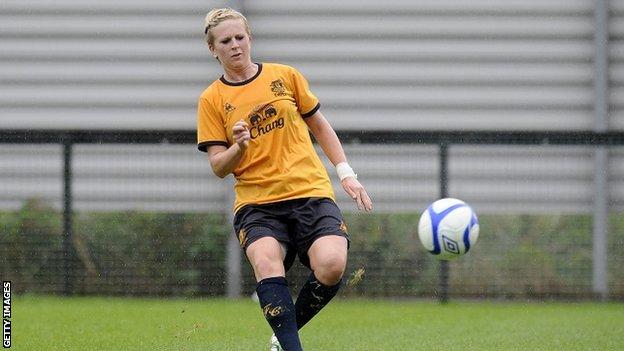 Everton moved up to joint second in the Women's Super League with a win at Birmingham.

Chelsea are also in the hunt after a 2-0 win at managerless Liverpool, who in midweek parted company with manager Robbie Johnson.

And Bristol Academy, 3-1 winners at Lincoln on Saturday, make up the quartet chasing the Gunners.

Arsenal have a game in hand on the trailing pack after their scheduled weekend fixture with bottom of the table Doncaster Belles was postponed.

Goals by Natasha Dowie and Fara Williams gave Everton their first away win of the season as they joined Birmingham on 11 points.

Striker Dowie headed the Toffees into a 32nd-minute lead, but in a close-fought first half Birmingham almost drew level just before the interval.

Former Everton defender Emily Westwood's header was on target, but goalkeeper Rachel Brown managed to touch the ball on to the crossbar.

That save proved crucial as the visitors held off second half pressure before Williams hit their second goal with a spectacular 79th-minute strike.

Striker Jodie Taylor pulled a goal back with a well-hit 85th minute shot, but it was too little too late as Birmingham lost their 100% home record.

Assistant manager Andy Williams took charge of Liverpool but could not inspire his team to a first home victory of the season.

After being on the back foot for the majority of the first half the Reds started the second half brightly.

But they never recovered after Chelsea struck twice midway through the second period.

And 12 minutes later central defender Gemma Bonner grabbed the second when she headed midfielder Dani Buet's corner in off the crossbar.

Striker Natasha Harding bagged a brace as Bristol came from behind to take all three points.

The visitors bounced back after striker Precious Hamilton had given the Imps a second-minute lead from Colette McCallum's cross.

The equaliser arrived just three minutes later, midfielder Jess Fishlock's free-kick floating over everyone in the penalty area to bounce in off the far post.

Harding then headed Academy in front from a cross by Spanish striker Laura del Rio.

And 11 minutes before half-time Harding hit what proved the decisive goal with a shot that goalkeeper Nicola Hobbs could only help into the net.