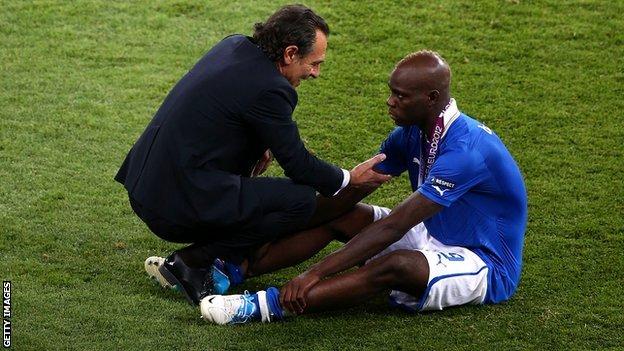 Italy coach Cesare Prandelli admitted his side were comprehensively outplayed in the final of Euro 2012, but insisted they will learn from the experience.

The Italians succumbed to two goals in each half to slip to a 4-0 defeat, the worst scoreline in a final in European Championships history.

However, the 54-year-old manager added: "You can grow from the experience. I am very proud of my team."

Italy competed bravely in over 90 minutes but were undone by strikes from David Silva and Jordi Alba and, late on, Fernando Torres and Juan Mata.

Substitute Thiago Motta also suffered a hamstring strain and Italy, who had already introduced their three replacements, were left to battle with 10 men for the last half hour.

One-time Roma and Fiorentina boss Prandelli admitted: "Perhaps we could have got back into the game at the start of the second half, we had two chances but of course once Thiago Motta went off injured, we didn't have anything left in the tank."

And he was pragmatic at full-time: "You have to hold your hands up and say the opponents were better, accept defeat.

"We have to congratulate a great side for their victory."

Spain had a extra 24 hours to rest and prepare for the final after defeating neighbours Portugal on penalties on Wednesday, while Italy overcame Germany 2-1 on Thursday.

Prandelli, who will lead Italy into their 2014 World Cup qualifying campaign from the autumn, bemoaned the day's difference, but admitted his side were second best.

"Against a team like Spain I think you really need to be good in the tackle and fit," he said.

"We've had a terrific European Championship. The only regret is the fact we didn't have a few extra days to rest up before this game."

At the final whistle a number of Italy players, including experienced midfielder Andre Pirlo, were seen shedding tears of disappointment.

Manchester City striker Mario Balotelli left the field in obvious frustration before returning later to claim his runners-up medal for the tournament, but Prandelli stated that the defeat will provide valuable international experience for his squad.

"I told Mario that these are experiences you have to deal with and have to accept," said Prandelli.

"You also have to make sure this helps you going forward and you can grow from the experience.

"This has happened to a number of players, and will happen again, but this is what sport is all about."