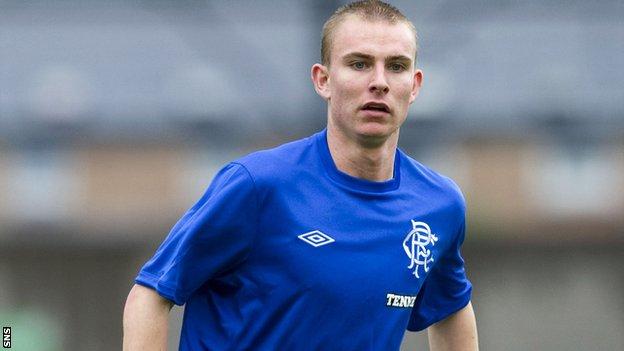 Midfielder Andrew Mitchell has pledged his future to the newco Rangers by signing a one-year contract.

The 20-year-old from Northern Ireland made two competitive appearances for Rangers before his contract expired at the end of last season.

Mitchell was one of 13 players who turned up for the club's first day of pre-season training on Thursday.

Manager Ally McCoist and midfielder Alejandro Bedoya have since joined their ranks.

US international Bedoya was given an extended summer break.

The 25-year-old moved to Ibrox from Swedish club Orebro last summer but managed just six starts for the club.

McCoist was not expected back at Murray Park until Monday, with his assistant Kenny McDowall overseeing last week's training.

Mitchell, who made his debut in a 2-1 defeat by Dundee United in March, joins compatriot Chris Hegarty in signing a deal with the relaunched club.

"I'm over the moon to be signing on again with Rangers," Mitchell told the club website. "I'm really buzzing about it.

"It has been a hard summer for me so I'm delighted to get everything sorted now so that I can concentrate on my football."